Fairtrade Farmers: Our Food and the Fight for Climate Justice #BeFairCOP26

The COP (Conference of the Parties) on Climate Change took place in Glasgow, in the UK, from 31 October to 12 November 2021. Fairtrade and the Fair Trade movement was on the ground in Glascow championing the rights of farmers and agricultural workers through a series of initiatives comprising a global petition demanding climate funding for farmers and a Fairtrade Youth Ambassador campaign to advocacy efforts with global leaders and their delegations.

With time running out to avert a climate catastrophe, Fairtrade Producer Networks came together to send a clear message to world leaders and governments at COP26 to be fair with their $100 billion climate promise. Our farmers and workers seek that the politicians at COP26 listen to their expertise and invest in smallholder farming communities as they face the climate crisis head on. 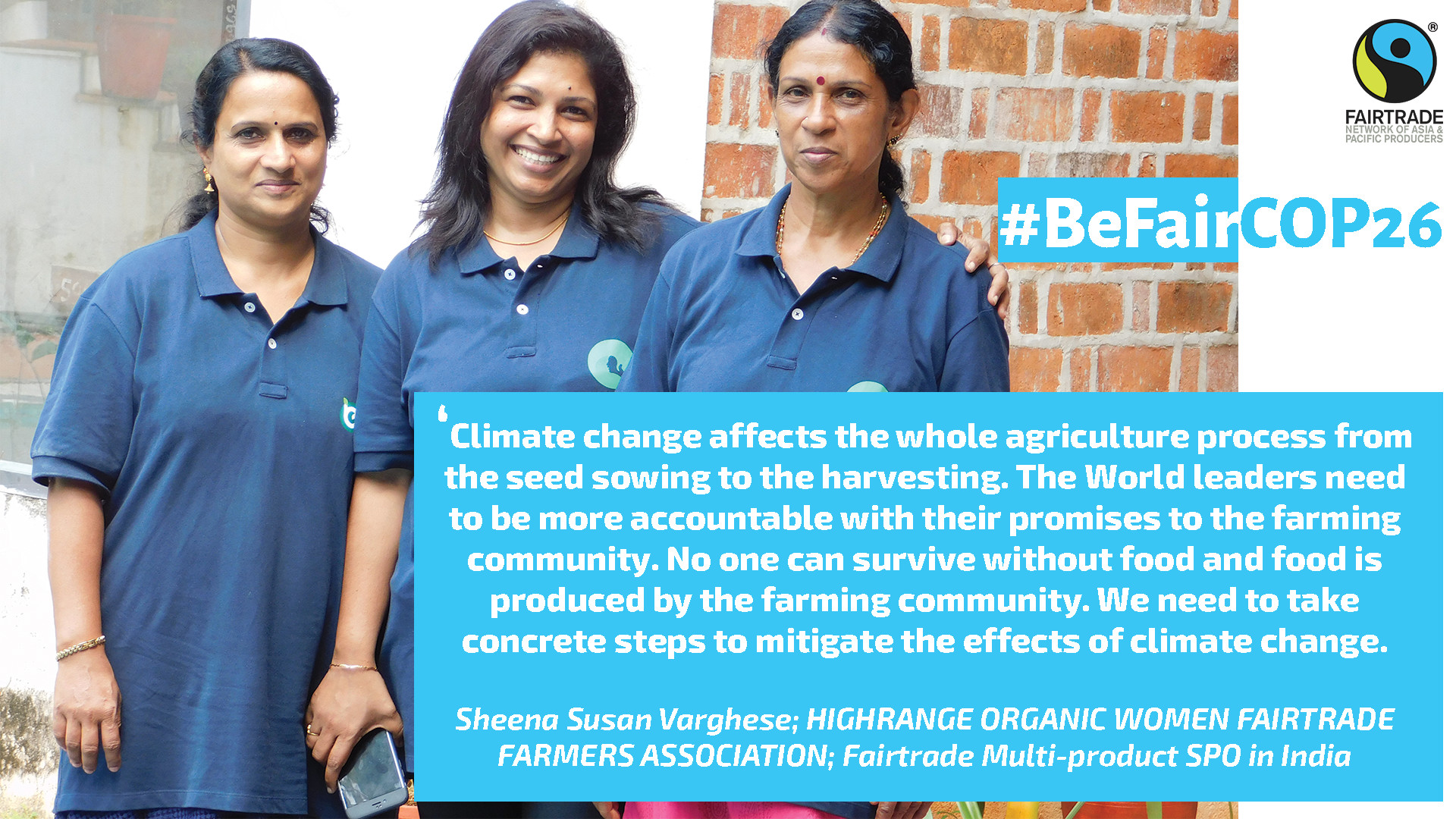 Fairtrade NAPP co-joined its effort with Fairtrade International and Producer Networks and Partners to participate at the Convention and urge governments to Be Fair with Their Climate Promise. We signed an open letter on behalf of 1.8 million Fairtrade farmers and workers worldwide seeking the governments most responsible for carbon emissions to keep their climate promises to farming communities suffering from a crisis they have done little to cause. 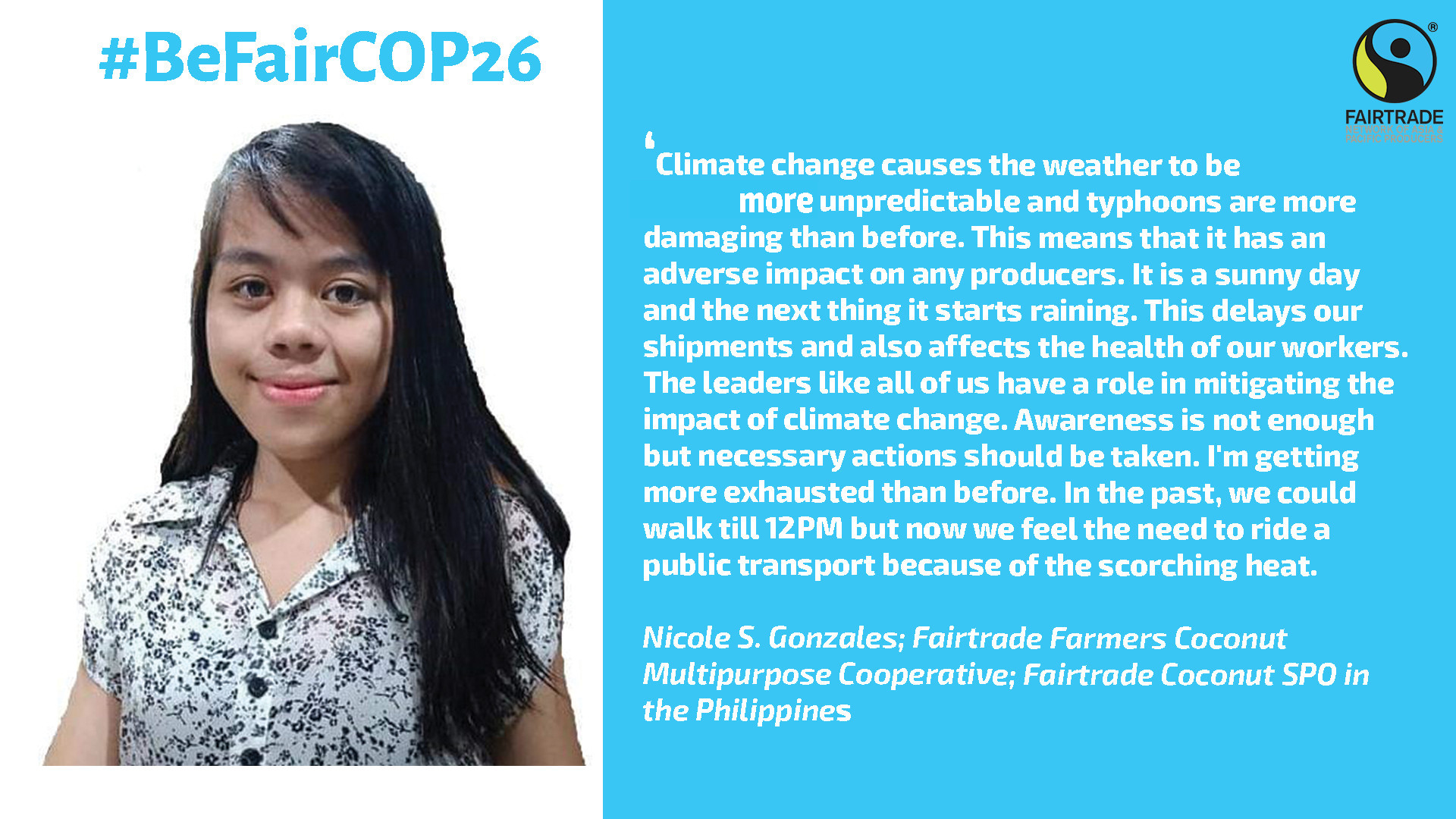 Watch below an interactive panel discussion with Fairtrade farmer representatives from the Producer Networks and business leaders to discuss what further action is needed from citizens, business and governments to scale-up global efforts to adapt to and mitigate the effects of climate change.
Fairtrade Network of Asia and Pacific Producers (NAPP) was represented by Muniraju Shivanna, NAPP Board member and a Sugar producer from India.

In order to achieve global climate targets, we need to transform the global food system and its relationship with global trade. Those already facing the harshest effects of the climate crisis must be a central part of building solutions for a just transition to a truly sustainable global food system. Farming communities in climate vulnerable nations across the Global South are amongst those already experiencing the worst effects of climate change.

Muniraju Shivanna, NAPP Board member and a Sugar producer from India shared some of the actions that the Fairtrade Sugar Producer Network in India is already taking to adapt and support their communities and transition to more climate-friendly farming methods.

One of the Project highlighted was the Fairtrade Sustainable Sugarcane Intensification (FSSI) Project as a good agriculture practice leading to climate change mitigation, water use efficiency, better yield etc for the Fairtrade small scale sugarcane farmers in India. The Project was funded by the State Secretariat for Economic Affairs of Switzerland (SECO) under the partnership agreement between Fairtrade NAPP and Max Havelaar Switzerland for supporting the farming communities in Asia to mitigate the impact of COVID 19 on their social and economic sustainability with the funding support of State Secretariat for Economic Affairs of Switzerland (SECO). The Documentary film was funded by the European Union 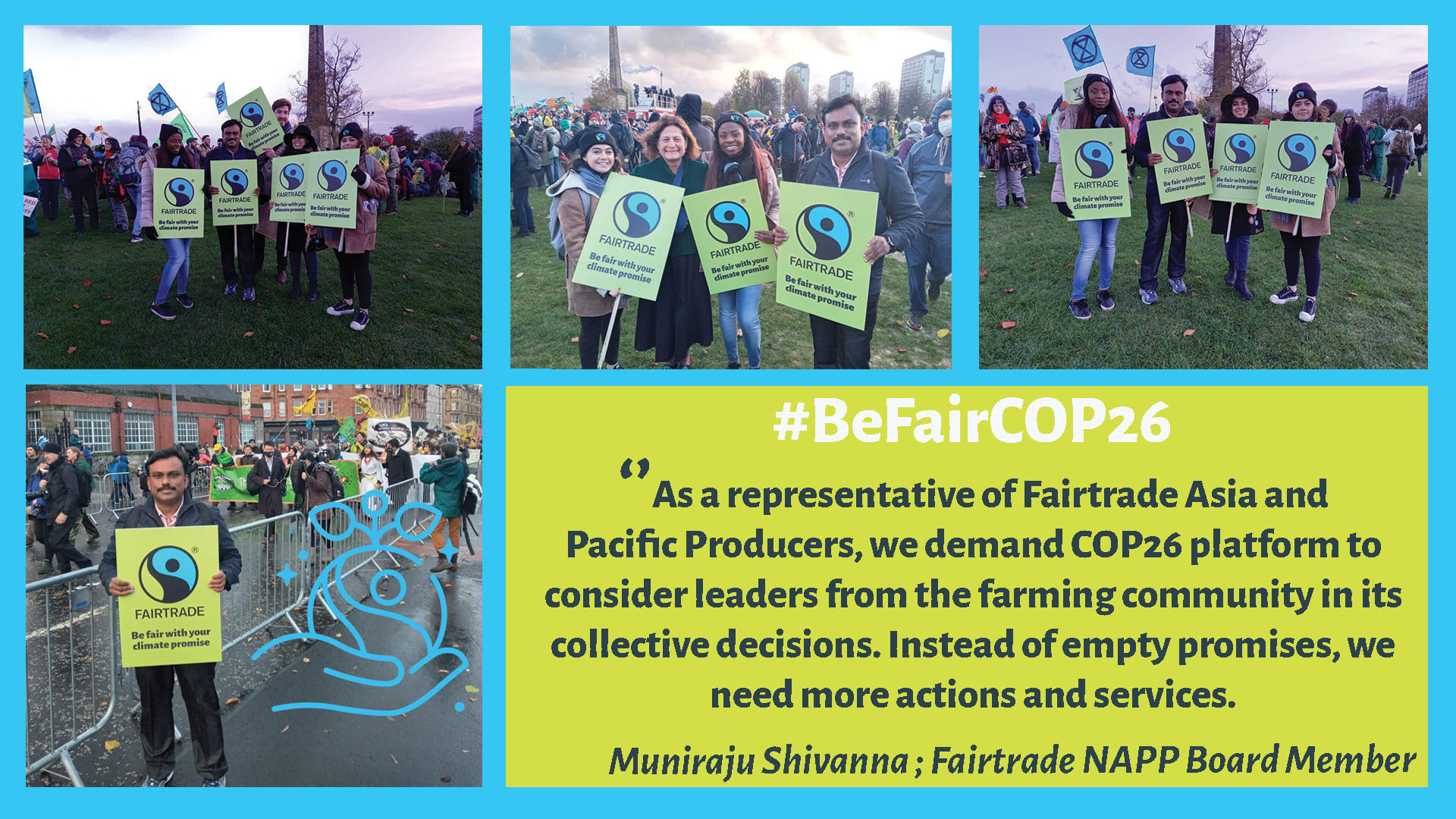 On 6th November 2021, Muniraju Shivanna also participated in a peaceful rally at the Glascow Streets last Saturday, demanding for climate justice. The rally was set to continue through the last date of CoP26 on 12th November.

“For the first time, I could really see the impact that climate change was having on farmers in my community,” explained Patil, 20, in an email interview with Fairtrade. “And I could see that immediate action was needed.”

Since then, Rutuja has honed her innate passion for working with other young activists in her community to drive local and global attention to the climate threats faced each day by farmers like her cousin. Above all, her knowledge and enthusiasm for sustainable and organic agriculture have inspired her to educate companies and individuals to adapt their daily behaviour for the creation of a fairer and greener future for all.

“Youth has a big role in tackling climate change,” Yuliana told Fairtrade in a recent interview. “As youth advocates, we can also form a climate community to voice global aspirations regarding environmental issues and the climate change crisis”.

An active member of both the Youth Council of Permata Gayo and the Youth Council of Kokowagayo, Yuliana has also participated in the Fairtrade Gender Leadership School, putting her front and center in her community’s efforts to fight climate change and work towards the Sustainable Development Goals (SDGs). With a flair for communication and a focus on sustainable causes, she has been on the forefront of several Fairtrade platforms representing the voices of women youth farmers in the coffee sector.

Our producers speak on why climate change is an issue for them, how do they feel about it and why is it important for wealthy governments to keep their climate promises – especially in delivering the finance already promised to support farming communities? 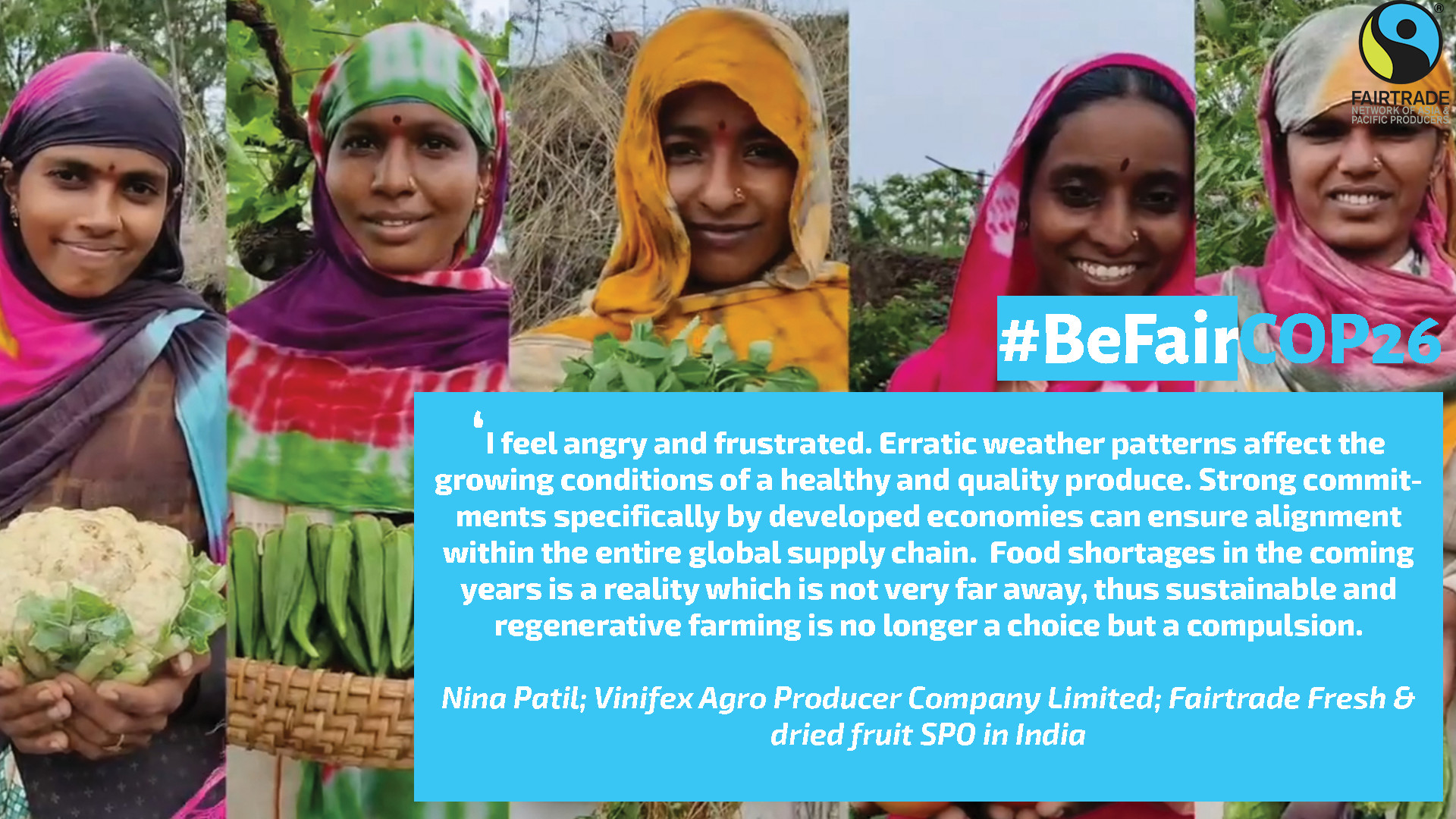 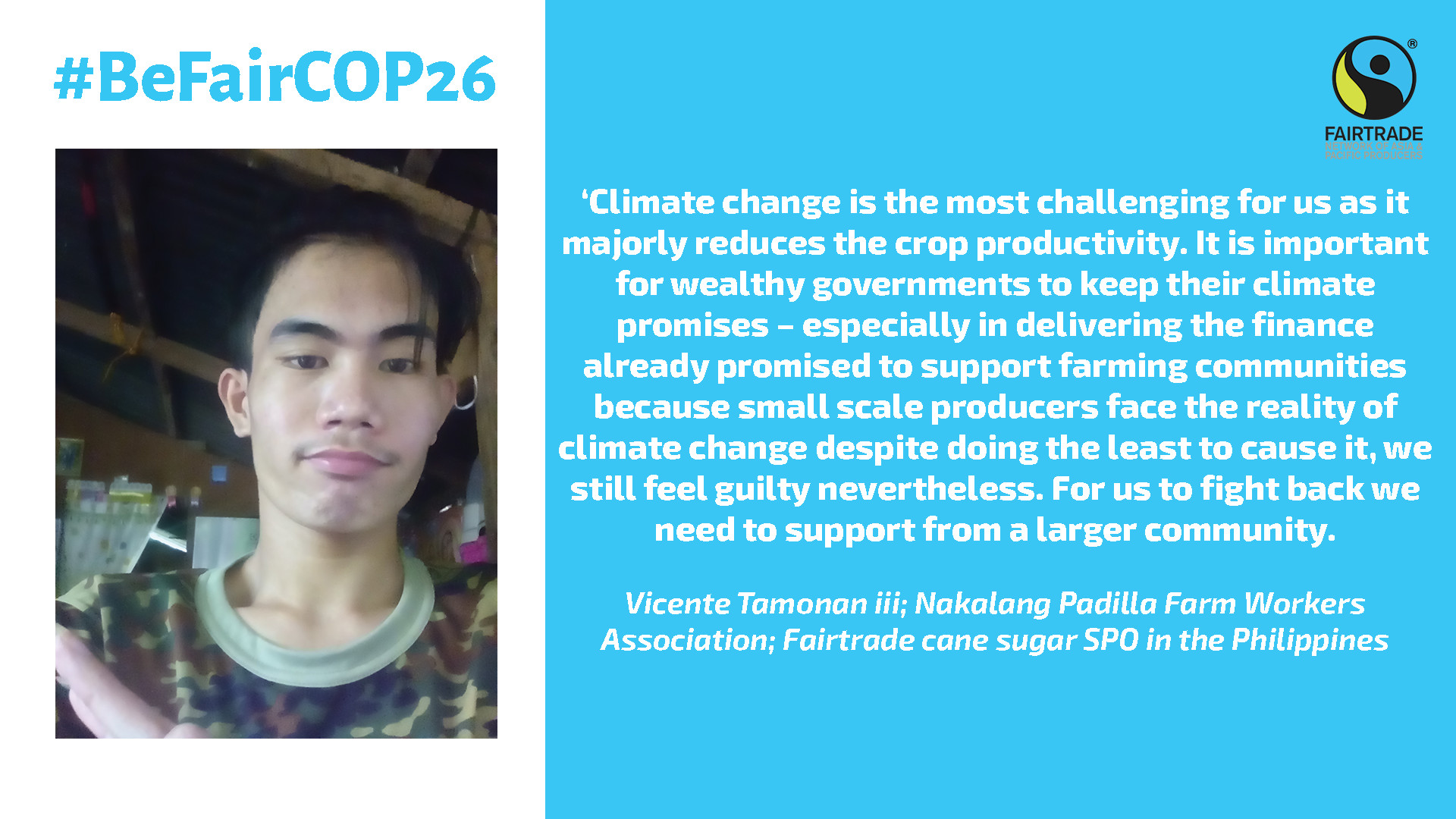