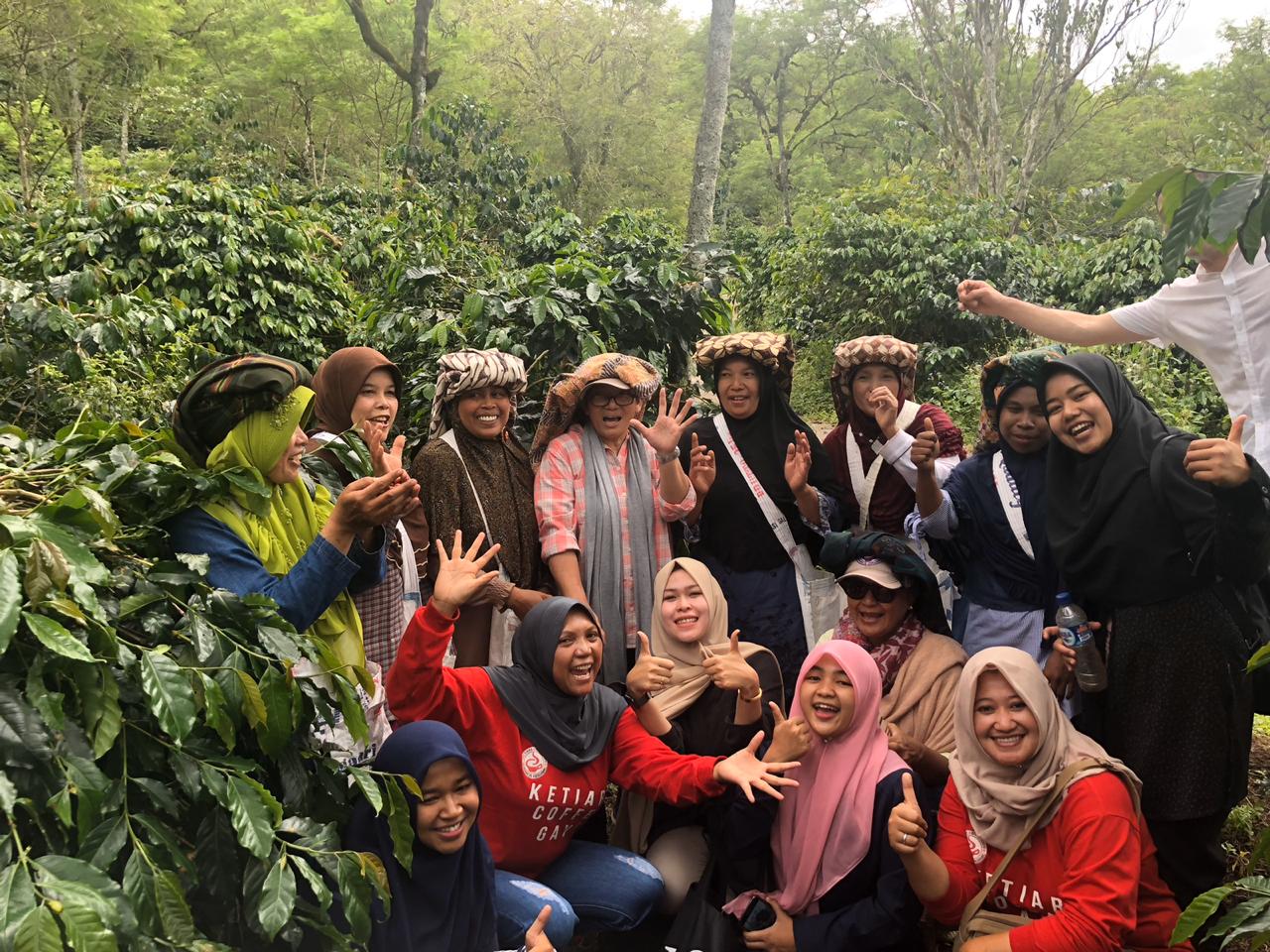 Coffee and Women of Gayo in the culture of Patriarchy by Ms. Ibu Rahmah, Ketiara Group 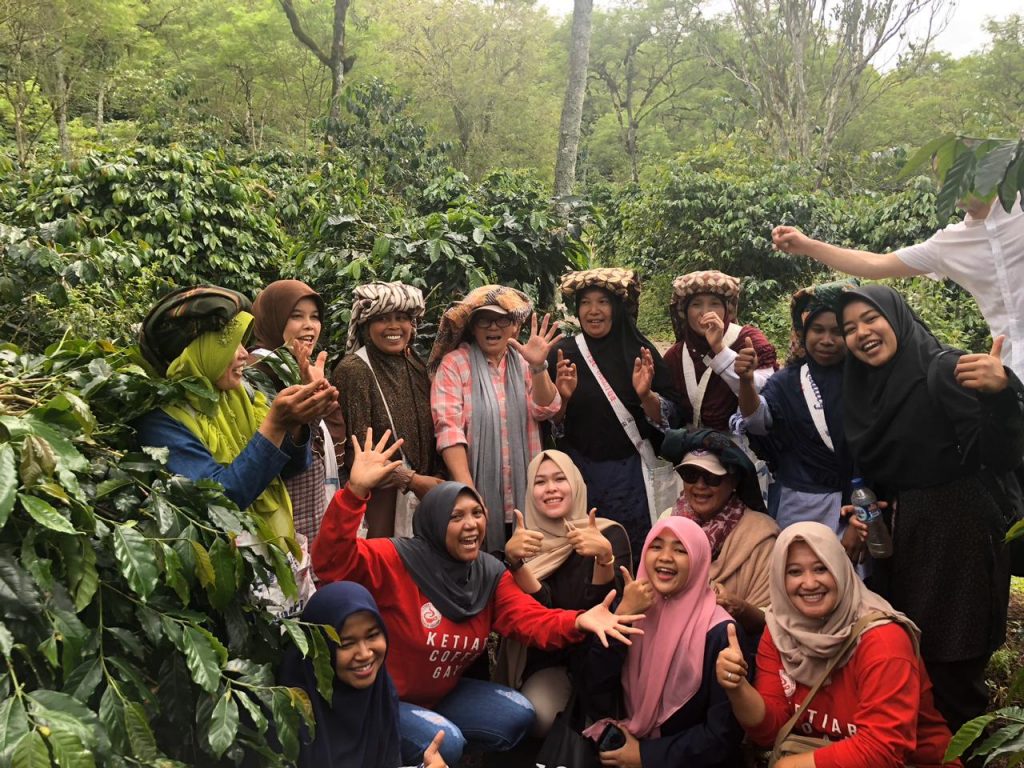 ‘’ My name is Ibu Rahmah, I am a woman, a wife, a mother with 4 children and also the CEO of Ketiara Business group in Central Aceh, Sumatra, Indonesia. I have been in the traditional coffee business for more than two decades and recognized by important traders/exporters in Indonesia. Our company has been trading coffee for more than 25 years. I started the whole business as a small trader, purchasing few kilos of cherry, hand processing it and delivering it to several traders in the region. Today Ketiara ships hundreds of containers across the world every year’’ 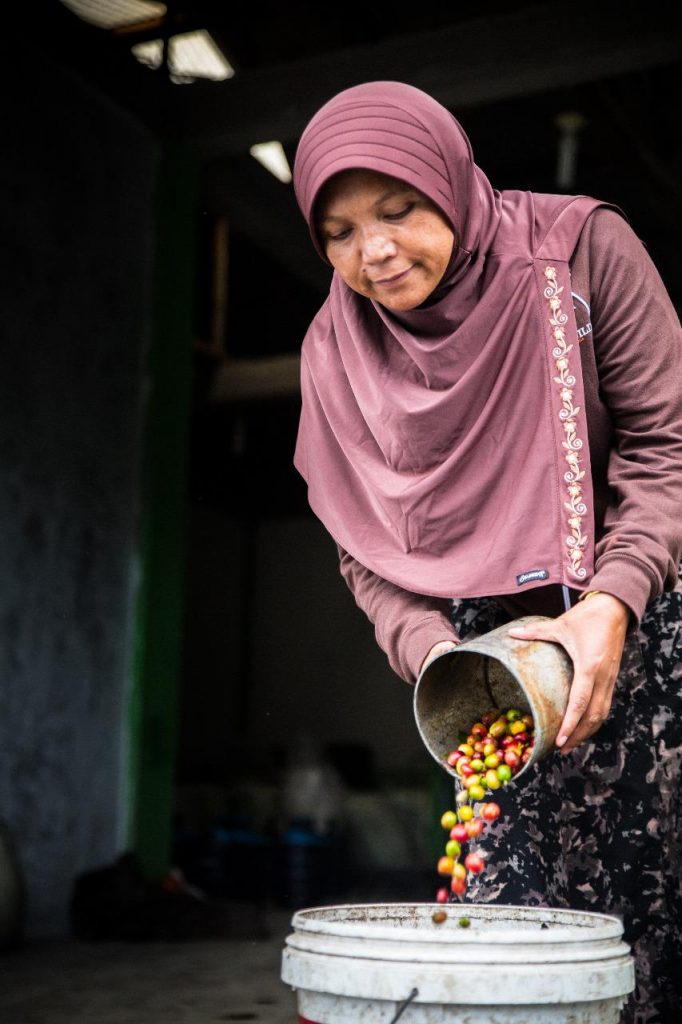 In 2009, Rahmah organized 37 other coffee traders and farmers to form the Ketiara cooperative.  Post its Fairtrade certification in  2011,  the overall organization was restructured into 100% small farmer organization with a current total member of 1,979+ farmers. It produces 100% organic Gayo Sumatra Origin Arabica Green Bean Grade 1 for overseas markets -US, Europe, Japan, Australia, and Asia and also several variants for local markets such as Conventional and Civet coffee.

‘’Ratu Ketara Gayo will stand for the empowerment of the young and next generation of coﬀee farmers. Coﬀee is the past and future of our people in the Gayo Highlands. Our livelihood is closely related to how we maintain our coﬀee farm. Ratu Ketiara Gayo believe that coﬀee is the source of welfare for their member’’ says Indayana -Chairwoman 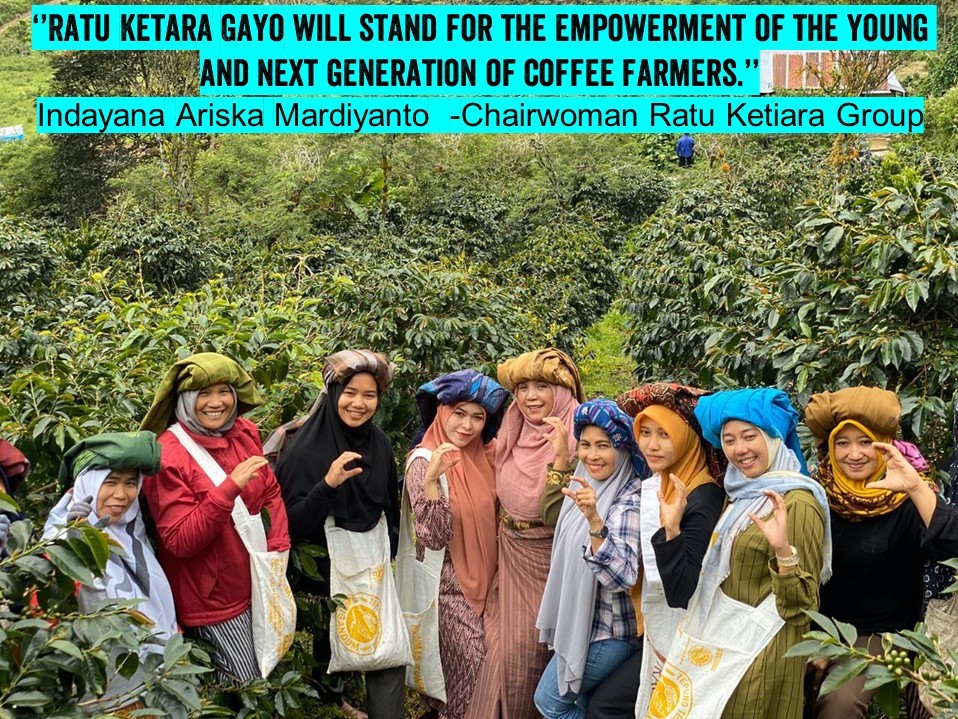 Pic: Indayana and Rahmah in the center with their women coffee farmers

“Women’s leadership in farming will transform the market and build the community. Rahmah cannot speak English but understands that any theme revolving around male dominance or patriarchy is very harsh and egotistical. Most women rarely use terms such as “leadership”, “transform”, “build”, or even “community”. Women, instead choose to use languages such as family, cooperation, love, good intentions, nature, and others. I would like to highlight the story of Sukarmi Ningsih. She is a farmer member of the Ketiara Cooperative. Sukarmi is also a coffee collector who is in charge of marketing the harvest from 80 farming families from the village of Jamur Uluh in Gayo, Central Aceh. She is also a wife and a mother, just like most of the women here’’

”At present, Sukarmi has 3 hectares of a coffee plantation. She was already acquainted with coffee farming since childhood. While her brothers were given the more rigorous task of cultivation, seeding and pruning, Sukarmi and her sister were given work that did not require much physical strength, such as cleaning grass/weed. 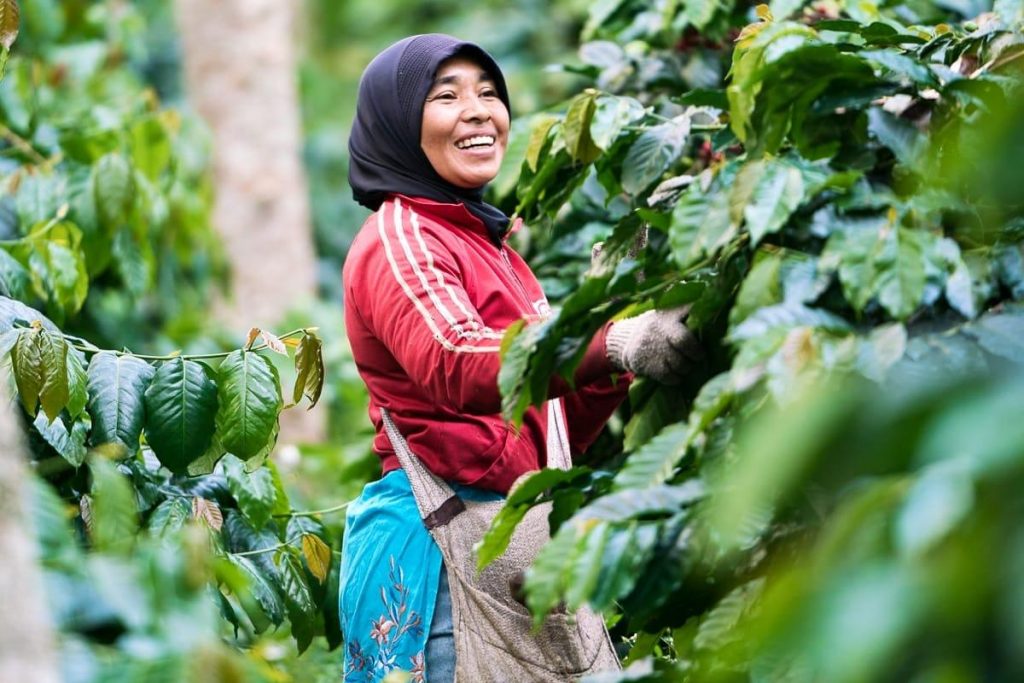 Sukarmi at her young age went to elementary school and like most of the girls here could not go to college. She then got married to Wagiran, a handsome, diligent and loyal youth from the neighboring village. During her marriage a half-acre of land was bequeathed to Sukarmi by her parents and slowly due to agriculture and trading from the produce of that land, the husband and wife could buy new land until now reaching approximately 3 hectares. They began to pursue coffee cultivation and became coffee traders/collectors from the village of Jamur Uluh.

She and her husband share the overall task of managing the farm and go to the farm every day. Wagiran, her husband usually leaves in the morning and is involved in farm work that requires a lot of “muscle work” such as clearing land/forest, hoeing, planting seeds, fertilizing, pruning, etc. Due to the heavy workload Wagiran, cannot deeply involve in matters of kids’ education, daily necessities, or family health such as taking care of sick children. Women here have “special rights” to education and health, about managing family needs. 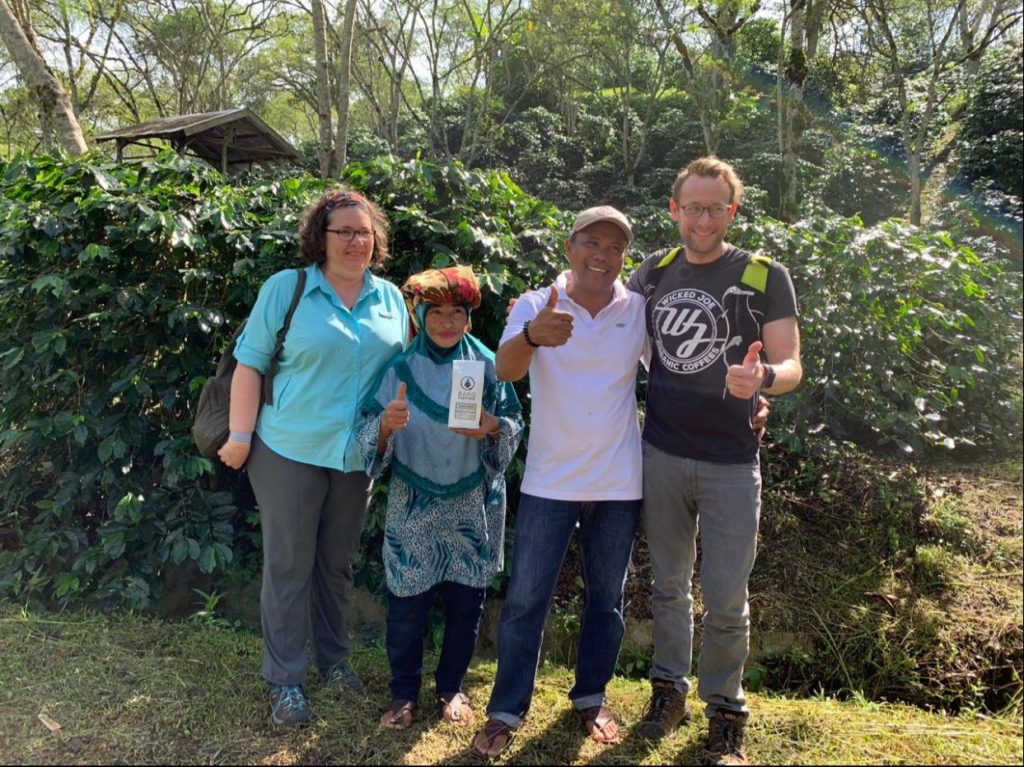 Pic:  Sukarmi and her husband Wagiran in the center with their buyers

Sukarmi remains busy in the morning. She caters to the needs of children, makes them breakfast, and prepare food for the husband while he is working at the farm. After dropping her kids to school, she goes to work on the farm to support her husband with certain farm work that requires carefulness and patience, such as trimming, harvesting red fruit, and sorting coffee beans. After harvesting, Wagiran completes the rest of the task – from processing to transporting it to the buyer/cooperative. He also has the responsibility of selling the harvest from Sukarmi’s customers to cooperatives. The money from the sale is then handed over to her, to be distributed to customers. 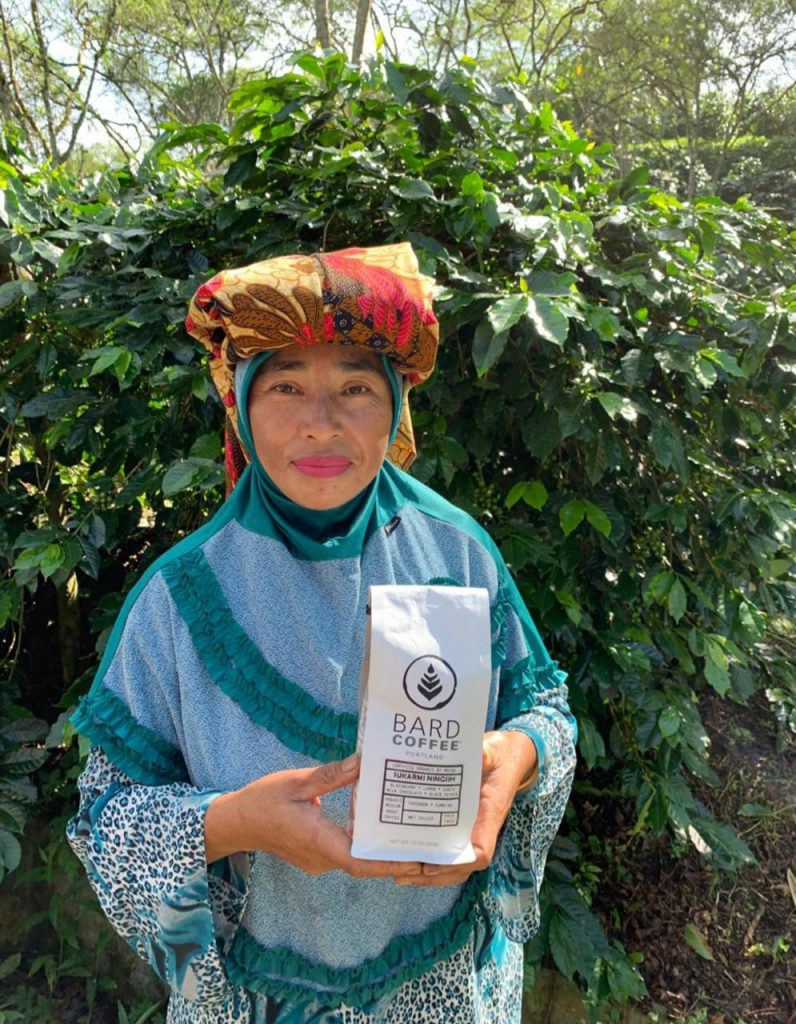 Pic: The coffee brand from her buyer bearing her name

As a trader or a collector, currently, Sukarmi buys and markets the harvest from more than 80 farming family in the village of Jamur Uluh. Farmers in the village deposit their yield to Sukarmi to be marketed.  The relationship between Sukarmi – as a collector – and 80 farming family is not limited to commercial relations such as economic transactions. Many of the customers do not want to be paid in full at once. They ask Sukarmi to save their harvest money for their emergency needs. Sukarmi helps them in critical needs such as sickness or other urgencies. She sometimes has to spend extra money, to help customers who suddenly need financial assistance, such as school fees, sick families, or weddings. This social relationship is not limited to buying and selling relations. Her role explains the importance of collectors in the coffee supply chain. Collectors have deep social roles and relations, far beyond the relationship models of multinational companies or cooperatives that are limited to the relation of buying and selling relations “when there are goods, there is money. 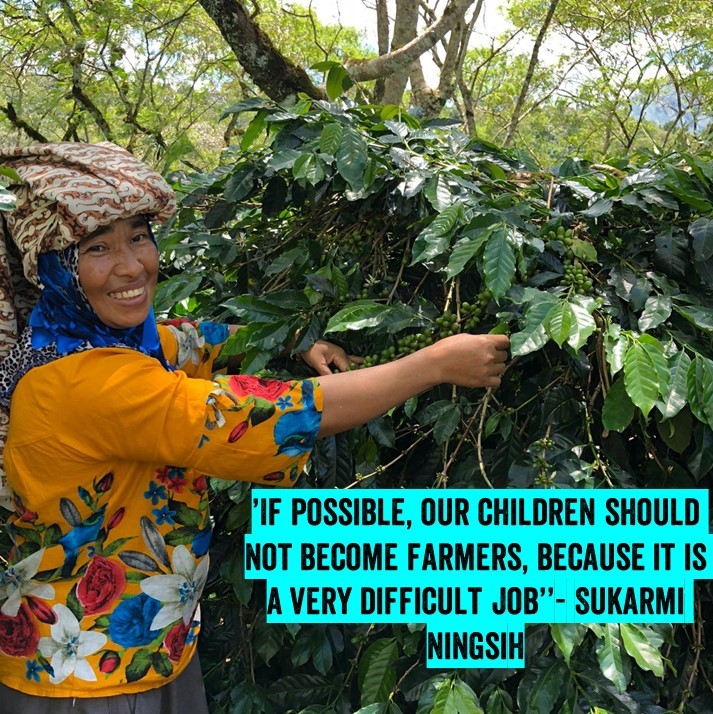 Today with her hard work and effort, both her children have received education in good medical institutions. Like most of the parents here, they want their children to get a better life. ‘’If possible, our children should not become farmers, because it is a very difficult job’’- says Sukarmi. This is what most of the farmers would say. If Sukarmi could choose, perhaps farming would have never been her choice for life. Majority of farmers (both men and women) consider farming as not a preferable profession, but rather their fate or whatever is set up by the God, and shall be grateful and lived with sincerity’’

”Returning to the above topic, there is no women leadership or men leadership, what exists is a thick social patriarchal system. It is present, real, alive and always “approved” in everyday life for both men and women. Even though women like Sukarmi Ningsih are not aware of it, the cooperative have offered them a form of non-patriarchal social relations: a very female relationship in the form of cooperation, love, sincerity, affection for the family, appreciation for husband, sacrifice, loyalty, being thankful to the Almighty, and social- commercial relations that are not limited to just sale transactions.

The feminist movement activists hate and strongly condemn the practices of the patriarchal cultural system. It is often not realized that such activism can represent the same patriarchal symbols and language that are hard and arrogant. Patriarchy does not need to be rejected loudly and arrogantly. Sukarmi Ningsih and many Gayo women are examples. We are aware of living in the social, political and cultural systems of the Patriarchy, but we can make peace with it, and offer finer ways without having to be aggressive and cause hurt and division’’ 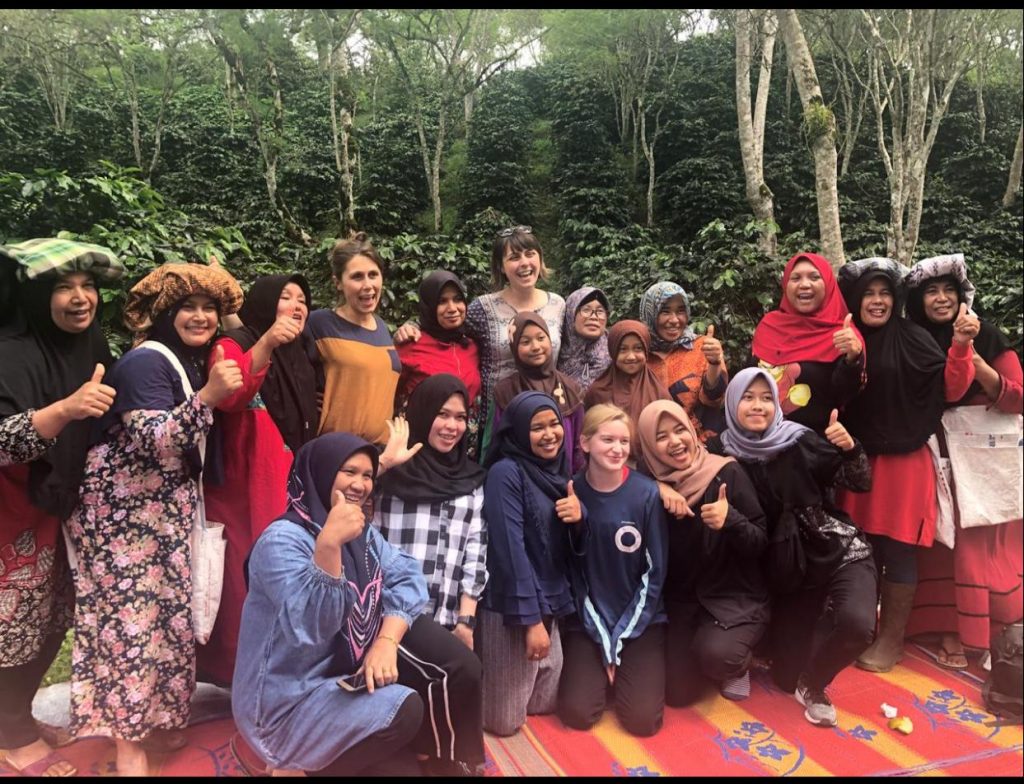 Pic: Women at the Cooperative with their buyer

Patriarchy is a social system that places men as the main holders of power and dominates in the role of political leadership, moral authority, social rights, language, and property control. In the family domain, a figure called father has authority over women, children, and property.