In the run up to International Women’s Day, we are featuring some of the countless inspiring women who work in Fairtrade farms and communities. Today, meet Wendy Rodriguez who, after fleeing from what was then a violent and drug-ridden climate in Northern Peru, returned to work for Fairtrade cocoa cooperative, Acopagro. 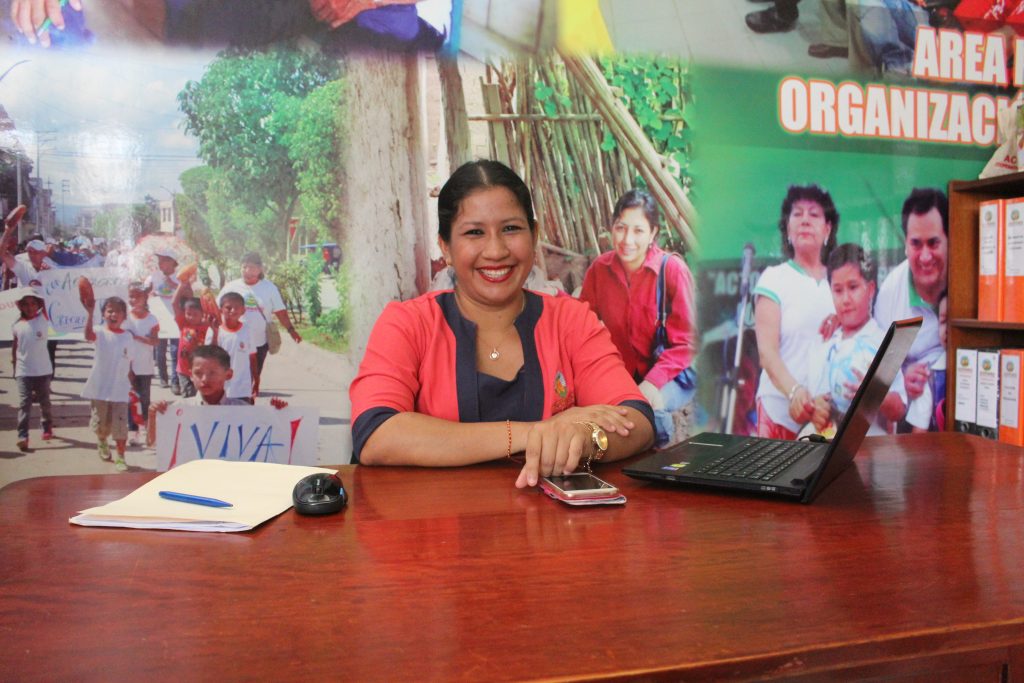 Every morning Wendy Rodriguez jumps on her motorbike, says goodbye to her daughter, Zoe, and her husband, Hernan, and ventures onto the arduous roads of San Martin, a region in the heart of Peru’s Amazon rainforest. Her job is to visit the members of Acopagro, a Fairtrade and organic cocoa cooperative that has been working for more than 20 years to help its farmers make their own way out of poverty. Getting to each of them is no easy task: the cooperative itself is based in the town of Juanjui, but its 2100 farmer members live in the forest and are spread out all around the region. Sometimes the only way to get from one place to another is to take one of the motor boats which sail along the Huallaga river.

But Wendy always finds a way to get to the farmers. For many of them, she is the voice and face of their cooperative. She is the one who encourages them in difficult moments, who listens to them, motivates them to take part in cooperative life and to speak up. She is also responsible for ensuring their empowerment and that their needs are heard. She collects their needs and brings them to the General Assembly, which deliberates how they can be met using Fairtrade Premium funds. Thanks to Fairtrade, their houses are now lighted with electricity. Running water is still on the wishlist and is dependent on getting enough Fairtrade sales.

Wendy can remember all too painfully what life was like here before Fairtrade. When Acopagro was founded 22 years ago there was no cocoa here, just cocaine. Farming families were hostages of illegal drug trafficking and victims of violence and threats. Wendy recalls: “One day a militia entered our house. I was a baby at that time, I remember my mother screaming. They took my dad and later we found out that he had been killed. He worked in a bank where drug-trafficking money was laundered.”

This traumatic experience left a deep mark on Wendy, as did the personal sacrifice of her mother, who was forced to raise her two daughters on her own. “Thanks to my mother I had an education. Then, for a few years I left Juanjui, a place that had brought so much suffering to my family.”

After some time, though, Wendy felt that she had to go back home and deal with her past. Becoming involved with Acopragro enabled her to realise that there was a positive alternative to violence. The cooperative was created thanks to a United Nations project at the end of the nineties to convert cocaine plantations to organic cocoa farming. Since then Acopagro has grown and developed a lot. “When our cocoa is bought on Fairtrade terms, we can grant our members social and health services, and technical assistance for their farming,” explains Wendy. “Last year 1600 members had eyesight tests and 950 women in the cooperative took part in a health campaign for the prevention of uterine cancer. In an area like this, where violence and machismo are endemic, the work we do for these people is really important.”