July 11th, 2019 marked the launch of the 4th NAPP Gender Leadership School in Pakistan with the enrolment of 30 participants (15 Females 15 Men) from 11 Fairtrade producer organisations.

After a series of Training in the last 01 year, the Convocation Ceremony of the GLS Pakistan was held on 1st July 2021, where all the 30 participants were awarded a certificate for successful completion of the Training on Gender.  The Gender Leaders are now qualified to be an ‘A’ level trainer at the Producer level and can implement Gender-based activities at the SPO level along with the support from the NAPP country focal point and NAPP Gender desk.

In the pic: GLS members  pose for a group pic with Sarah Anum- Fairtrade Program Consultant  to proudly display their Convocation Certificate 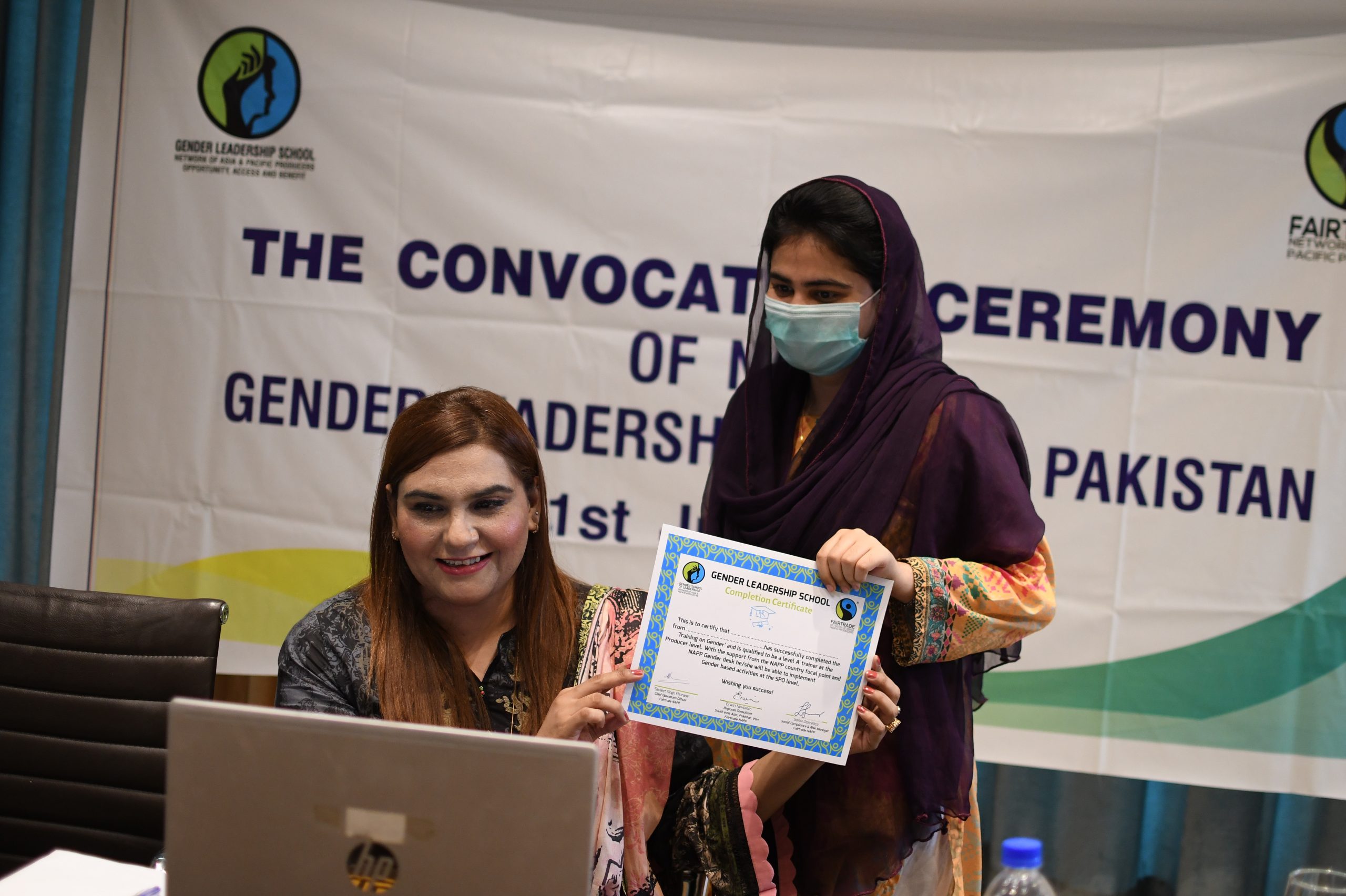 The ceremony was formally opened with the recitation of the Holy Quran and the introduction of the participants by Sarah Sheraz, the Fairtrade Program Consultant of Pakistan.

Sanjeet Singh Khurana, the Chief Operations Officer of Fairtrade NAPP mentioned that the Gender Leadership School was the first established flagship program of NAPP and has been one of its successful thematic undertakings.  Acknowledging the completion of the GLS Project in Pakistan, he stated that GLS Pakistan was the only school with the full participation of all the Fairtrade certified organizations in the country.  He appreciated and congratulated the efforts of the GLS participants, the senior management of SPOs, and the NAPP representatives who played a vital role in its successful closure. He also highlighted some of the initiatives of NAPP that focussed on the betterment of society such as health and safety, youth initiatives, and gender programs, and stated that we all should remain committed to our core purpose of being a part of Fairtrade. 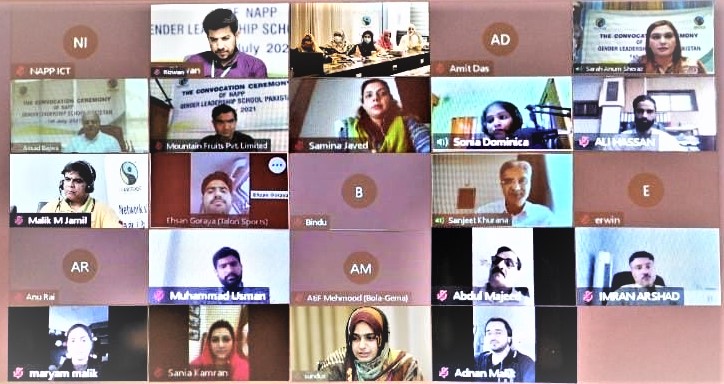 In the pic: Speakers, Guests, and Participants during the Virtual Convocation

Assad Bajwa, the Chairman of Fairtrade Producers Network of Pakistan, gave an overview of the journey of GLS in Pakistan. He spoke about the presence of gender discrimination at every level, and though there are laws against gender-based violation the implementation remains poor. Therefore, Gender-based programs are critical tools in creating awareness among the community. He appreciated the efforts of NAPP in recognising the potential of women in the agricultural sector in taking up leadership and overarching roles. 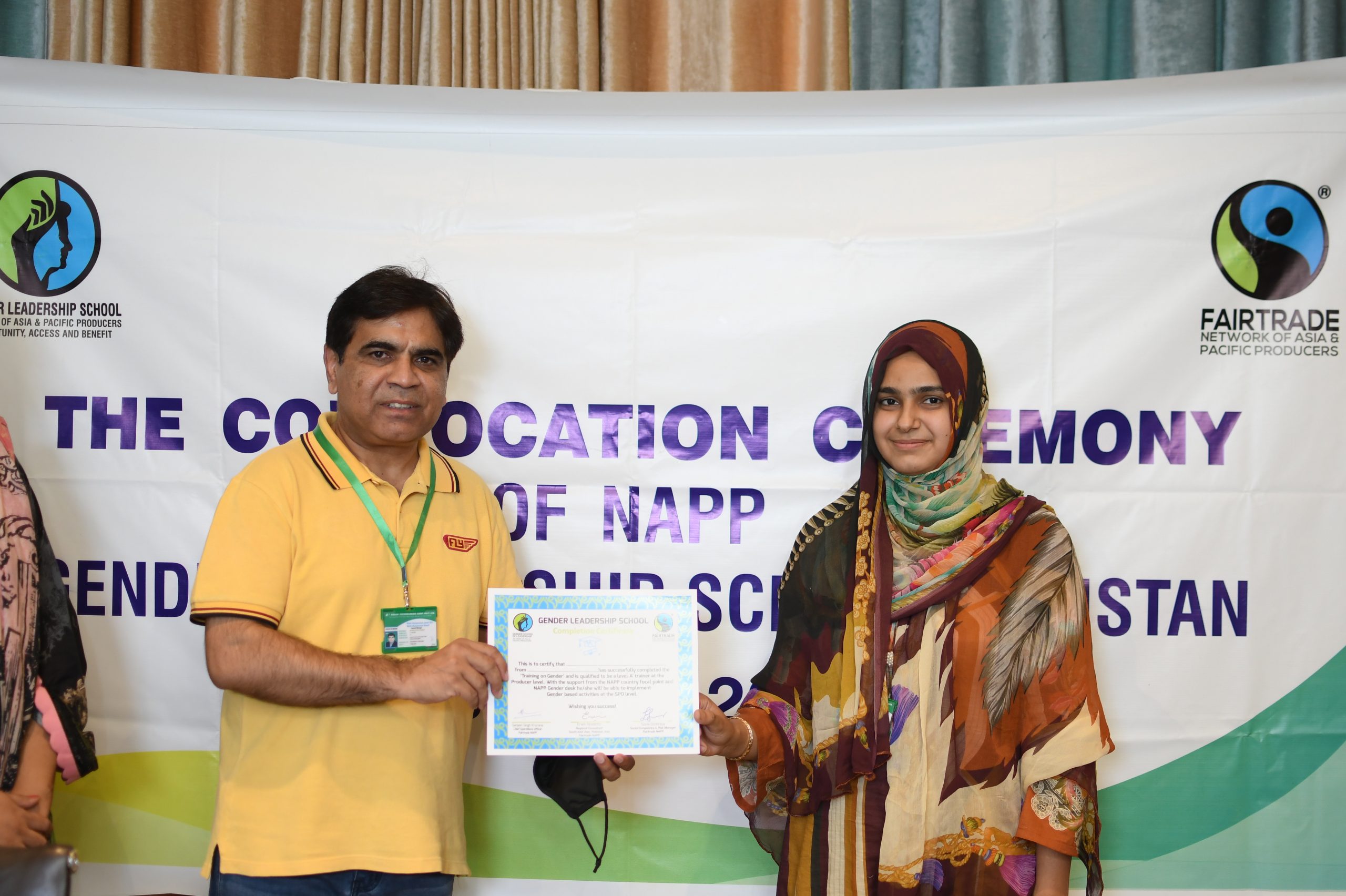 In the pic: Malik Jameel presents the Convocation Certificate to the GLS participants

Malik Jameel, the Former Chairperson of Fairtrade Producers Network in Pakistan, stated that the GLS was a great platform for the producer organisation to strengthening their gender-based knowledge and capacities. “I appreciate the great mind who initiate this idea of Gender Leadership School”, -he briefly stated admiring the concept of GLS and wished for its continuity. “Though it was a big challenge to manage and carry out the activities during the pandemic, we made it. Such initiatives should not stop, and we can support further by presenting more ideas and proposals.” 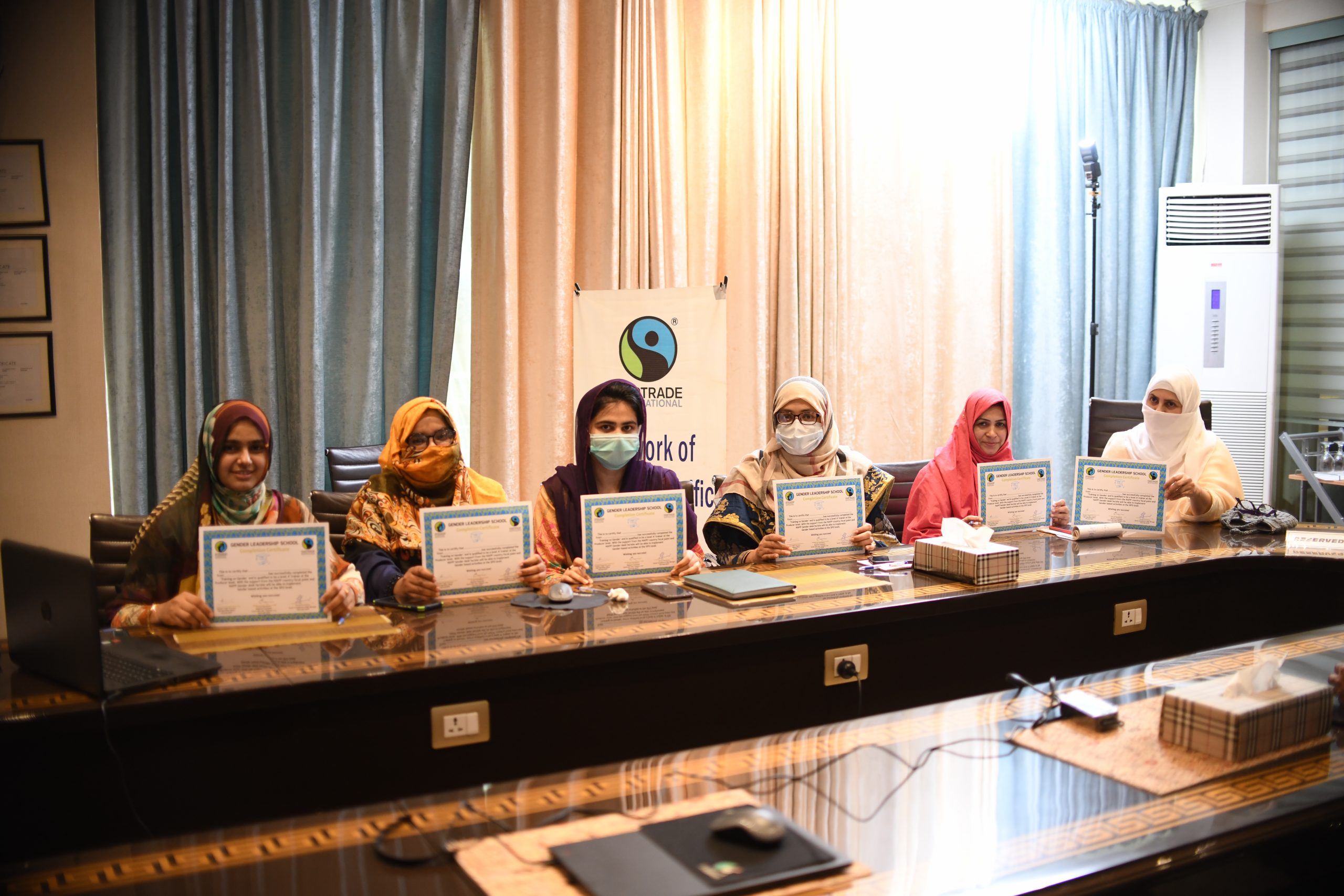 In the Pic: Glimpse of the Virtual GLS session

The GLS platform has also paved way for the entry of Fairtrade advocacy work in Pakistan through the involvement and support extended by the Govt. Officials.

Sania Kamran a member of the Provincial Assembly of Pakistan Tehreek e Insaaf Party, graced the occasion with her thought-provoking speech on her distinct concern about women’s place in the current society and the changes required to empower and support them.

Laying much emphasis on the importance of education for girls she says, “Women are multi-taskers.  If we educate a woman, we educate a whole generation”- She highly discourages early and forced marriages as it spoils the lives of young girls and the coming generations. To control the early age marriage the current Government proposes to add the National Identity card number to the marriage certificate. She concluded by ensuring her commitment towards the rights of workers and labourers and the industry at the provincial level and further pledged to raise voices for them, especially women and children by putting resolutions in the Punjab Assembly in the forthcoming sessions.

The Social Welfare Officer of Sialkot, Malik Adnan was also present at the session and expressed his interest to support the future initiatives of GLS and linking up the welfare schemes to workers and farmers by the department. 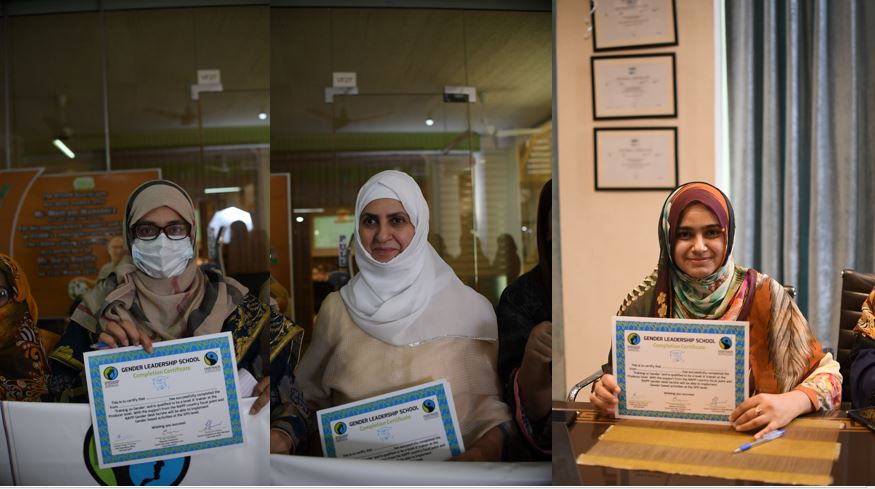 In the Pic: Proud GLS Graduates

Sundas Khalil, a GLS member from Vision Technologies, a Fairtrade Sports ball producer recalled her journey of learning through the various GLS sessions namely the awareness sessions on breast cancer, replication of training sessions for other members in the organisation, and the celebration of the international women’s day at their workplace on 8th March 2020. As for her personal growth, the training has enhanced her leadership and communication skills. She has learned to organise events and work well in a team-led environment.  The platform has given them a new dimension of exploring their potential and business skills. The vision team has developed 3 proposals for the future.

Ihsan Ullah Guriyia, another GLS member from Talon Sports expressed how this platform has changed their way of thinking for the better. Prior to the implementation of GLS, they never thought of transgenders being provided an opportunity to work along with them.

Through the various awareness session, they have not only realized the importance of inclusivity at the individual level but have also asked the senior management in the organization to allocate quotas for transgenders and it should be a part of their HR policy. During the announcement of any vacant positions, there should be a clause inviting applications from transgenders as well. Ihsan believes such small initiatives can bring a big change in the future regarding the reduction of gender-based and violence. 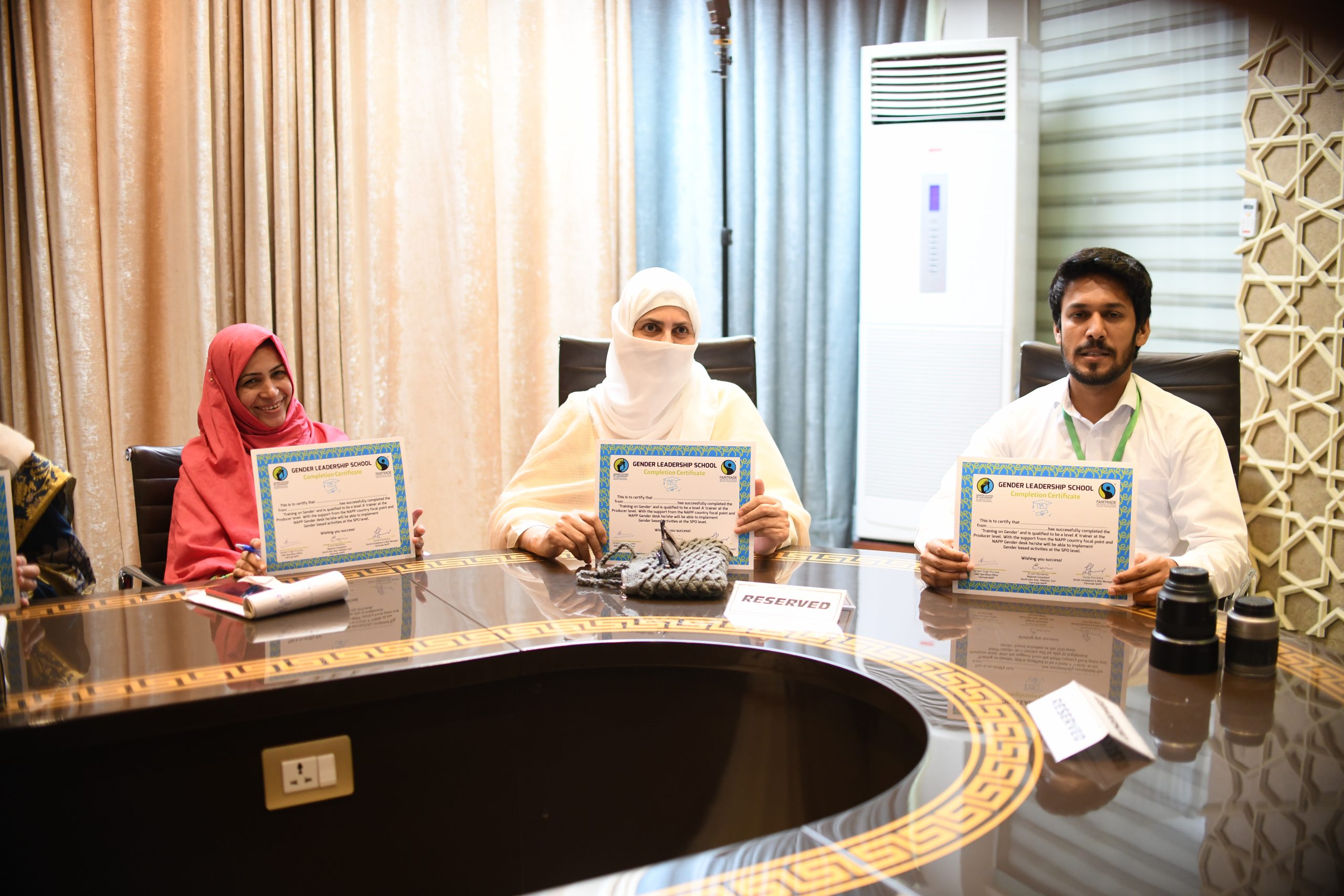 In the Pic: Glimpse from the Virtual GLS session

Abdul Majeed from Hope Farmers Association also appreciated the GLS initiative and its achievements. He said that such programs can increase the empowerment and sense of security among the youth and women at all levels.

Usman another GLS member from Masoom support Foundation mentioned that after the team attended the first session of the GLS session they replicated the learnings with the families of their employees. They also conducted the training for the farming communities as well which was received wholeheartedly by the male farmers and their families, who never attended such awareness before.

The Convocation was also attended by the team from Ali Trading, who had previously completed 02 sessions before their organisation was decertified. They mentioned the platform was full of knowledge and awareness.

Samina the Gender Consultant for Pakistan mentions that since the participants came from diverse groups and were very competent, it has been been a two-way learning process for her. She wished the participants their successful graduation and asked them to adopt all the gender-based best practices in the future. 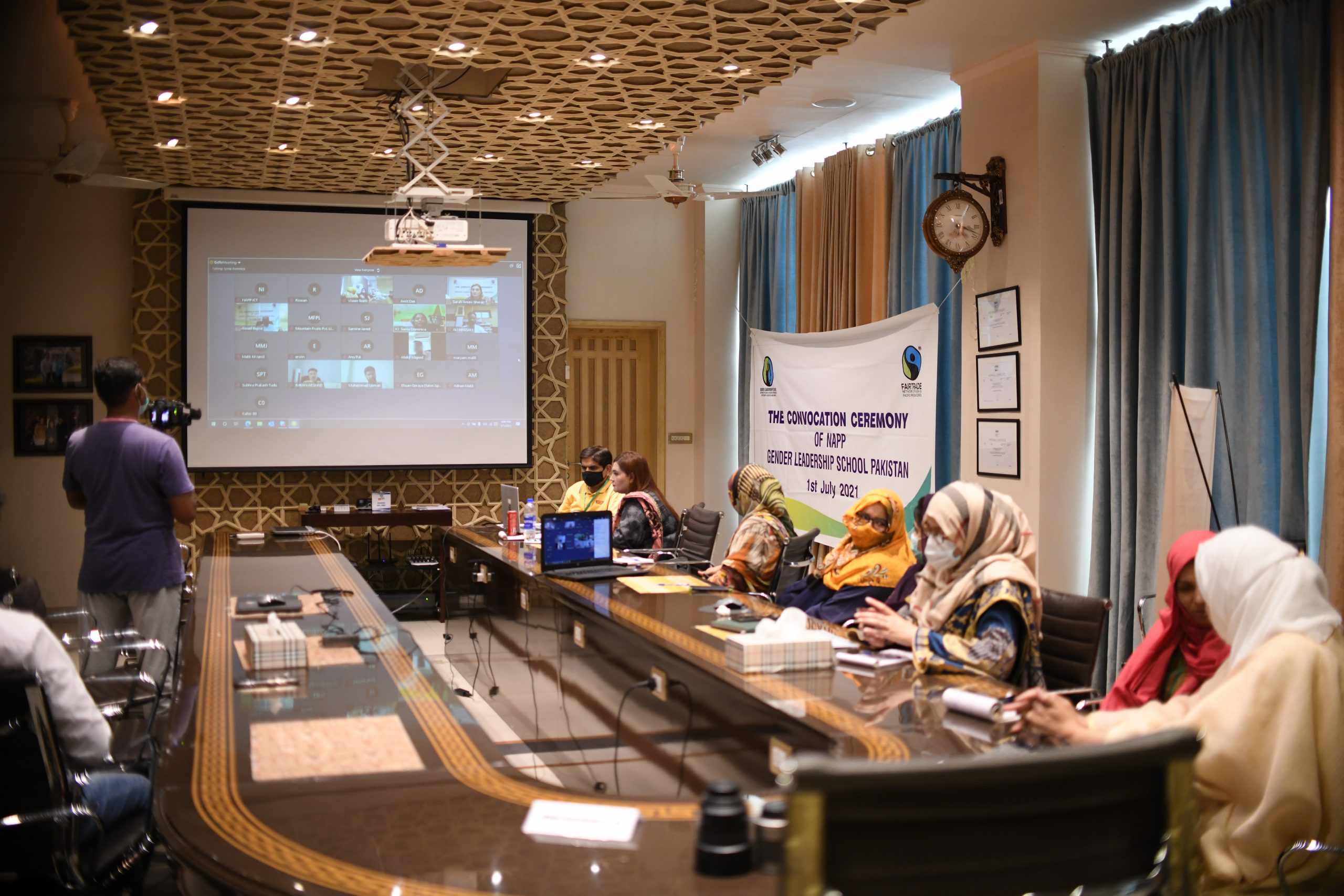 In the Pic: Glimpse from the Virtual GLS session

Erwin Novianto, Fairtrade Regional Consultant, South-East Asia congratulated the GLS team and wished them good luck for the future.  He said it was the beginning of a great journey and hard work always gives good results.

Sonia Dominica the Social Compliance & Risk Manager of Fairtrade NAPP thanked the overall team for all their hard work in making the GLS successful. She mentions though there are many other programs on gender, the GLS clearly stood out. Appreciating the efforts of the Chairman and the Former Chairperson of Fairtrade Producers Network, in playing a key role in the successful completion of the GLS, she made a request to increase the number of women memberships at the Board level. In response, Assad Bajwa mentioned that they will work in mobilizing women members to be a part of the Board and in the coming years, Pakistan will have new members in the Network. The assurance was another success of the GLS-Pakistan.

Way Forward for the Women Leader

To support the women to take on leadership and management roles in their communities, organizations, and households, proposals were called for Small Entrepreneurships Projects that will be supported through the GLS Platform. A total of 05 Proposals were received by the GLS core team and post a series of evaluations, 03 proposals were selected to be implemented under the banner of GLS.

The selected projects include:

After 6 months the remaining of the Producer organisations can re-apply and file their proposals.

Sarah Sheraz, Fairtrade Program Consultant Pakistan & Iran thanked all the Fairtrade NAAP team, the SPOs and the participants who spared their time for the ceremony and made the GLS Pakistan victorious.

Reflections from The Participants: 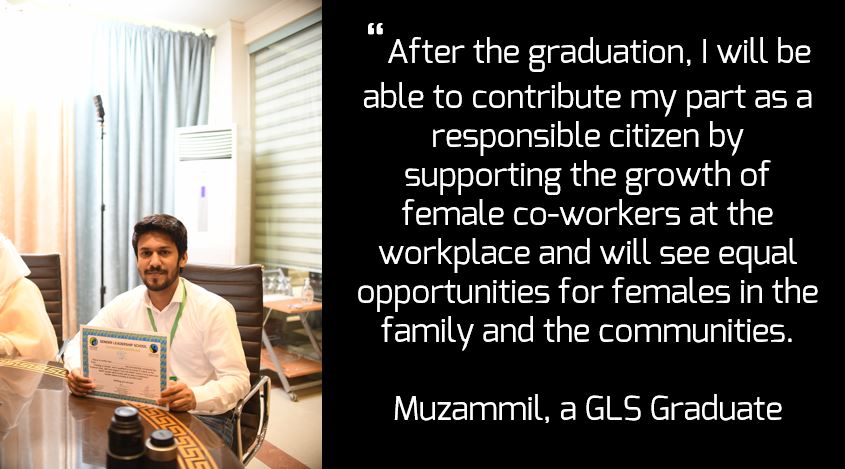 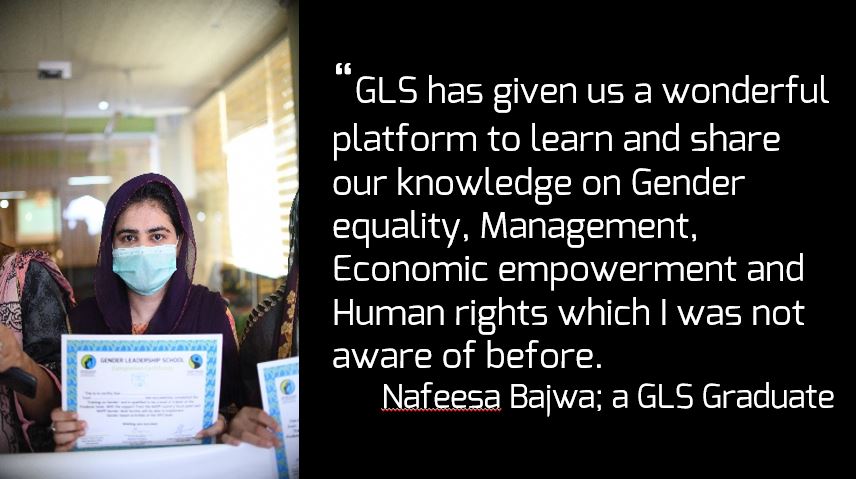