As 2021 marks the International Year for the Elimination of Child Labour, individuals, communities, and institutions worldwide all set to boost their efforts to curb child labour practices. Amidst the ongoing COVID 19 crisis, there are rising concerns of the lockdown further increasing the practices. 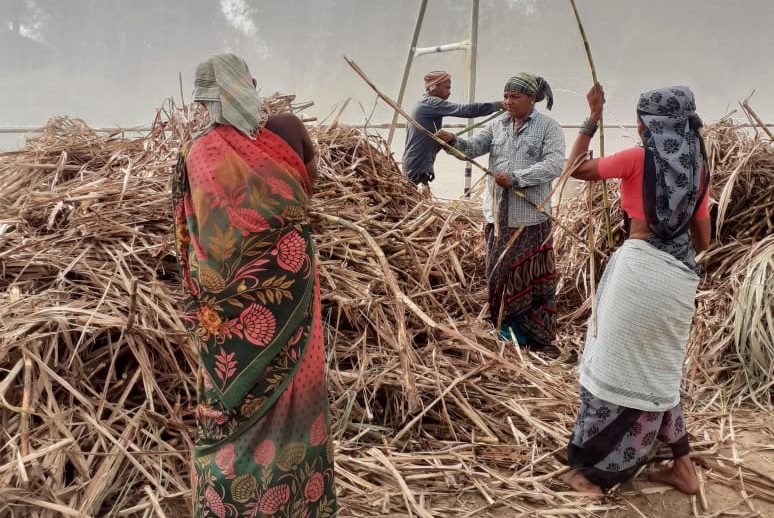 In India, the second-largest producer of sugarcane globally, millions of economically and socially deprived migrants are brought to the sugarcane-producing areas every year by paying them an advance at usurious interest to legitimize bondage. The lack of employment opportunities in their native villages, infertile agricultural land, political conflict over land and water, combined with the deeply rooted institute of the caste system and gender inequality are some of the crucial factors forcing them to take the debt.

There are several associated risks mapped during harvesting, bundling, and loading which involve the entire family including children. Harvesting can be a hazardous task as it involves the use of machetes without any protection. Men, women, young workers, and children clean sugarcane with sickles and work for long hours under the sun. The workers often work bare feet in the fields exposing them to the risk of snake and scorpion bites which can be fatal.

The canes are then loaded onto trucks by the contracted labourer from the sugar mill who is paid INR 20 per ton (.23 EUR approx.). Loading is a dangerous task, and accidents are frequent.  Bundling and loading without PPE can cause Injury. Once loaded it is then transported to the sugar mill and the truck driver is paid approx. INR 100-150 per ton (1.2 EUR to 1.5 EUR approx.), depending upon the distance.  Most of the trucks are over-loaded and often topple due to poor road conditions exposing the life of the transporters to grave danger. The payment to the farmer is generally made a month after the sugarcane has been supplied.

There is no age verification process in place for migrant workers. Youth are especially at risk, as they are treated as adult workers. The migrant workers camp in the fields for six to eight months and the children are unable to attend school because no schools are available. The seasonal workers are not registered with local authorities and there are no social security contributions made for the migrant workers.

Every year approx. two hundred thousand children migrate to work in sugarcane farms, often unaware of their living and working conditions which include temporary settlements, lack of access to water, sanitary facilities, medical assistance, and electricity. During the harvesting period, the entire family is engaged in labour where one can easily spot young adolescent boys cutting the cane and children piling it up. The situation is worse for women and young girls who have an additional burden of domestic chores, taking care of children both inside and outside of farms, and fetching water from miles away.

Fairtrade Sugar Producers of Belgaum, Karnataka have taken an initiative to collaborate their efforts with the local government to initiate due diligence and risks assessment for identifying migrant workers and for mapping child labourer’s around the communities.

The support from the small-scale core committee members has helped the government to expedite its protection measures for vulnerable children and adults. The rescued children and their families are provided with relief materials by the producers and handed over to the District Level Protection Agency.

The intervention of Fairtrade SPOs in Karnataka for addressing the risk associated with migrant labourers:

‘’Purediet – Fairtrade Sugar Trader co-joined their efforts with the producers for the above activities and pledge to source Fairtrade sugar from supply-chain that is free from child labour both at the production and at the mill level. ‘’

We, the members of Fairtrade Sugarcane Producer Network strongly understand that the child labourers are often denied the opportunity (temporarily or entirely) to attend schools, thereby jeopardizing their future and limiting their potential to develop. Confronted with the realities of rural poverty and a lack of infrastructure, producers frequently resort to using their children to reduce the labor costs on the family farm. Therefore, it is crucial to ensure that any such support given by children is neither dangerous nor detrimental to their education.

Therefore, the Indian Sugar Producers have successfully passed the SPO level Policy on ‘Protection of Children and Vulnerable Adults’ including the components of child labour and Code of Conduct to the Policy. We are gradually building knowledge among our members about the policy. We also urge other members of the Fairtrade family to frame the protection Policy so that we can together “Act to Protect” the vulnerable community.

Small Producers together are: