Hit enter to search or ESC to close
Latest NewsUncategorized

Today on World Environment Day, let us all aim to create awareness among more and more individuals and organisations worldwide to take certain actions against the growing strain on Earth’s natural ecosystem. Nothing excites us more than smart projects that not only mitigate carbon dioxide emissions but also adapt better to climate variability and change.

In South Asia, agriculture is one of the most vulnerable sectors to the anticipated climate change such as regular floods, droughts, and landslides. At the same time, it also a major contributor to the causes of climate change through the emission of greenhouse gasses (GHGs). As such Climate-smart agriculture technologies are an absolute necessity to sustain agricultural productivity and farm income without harming the environment and reducing GHG emissions wherever possible. 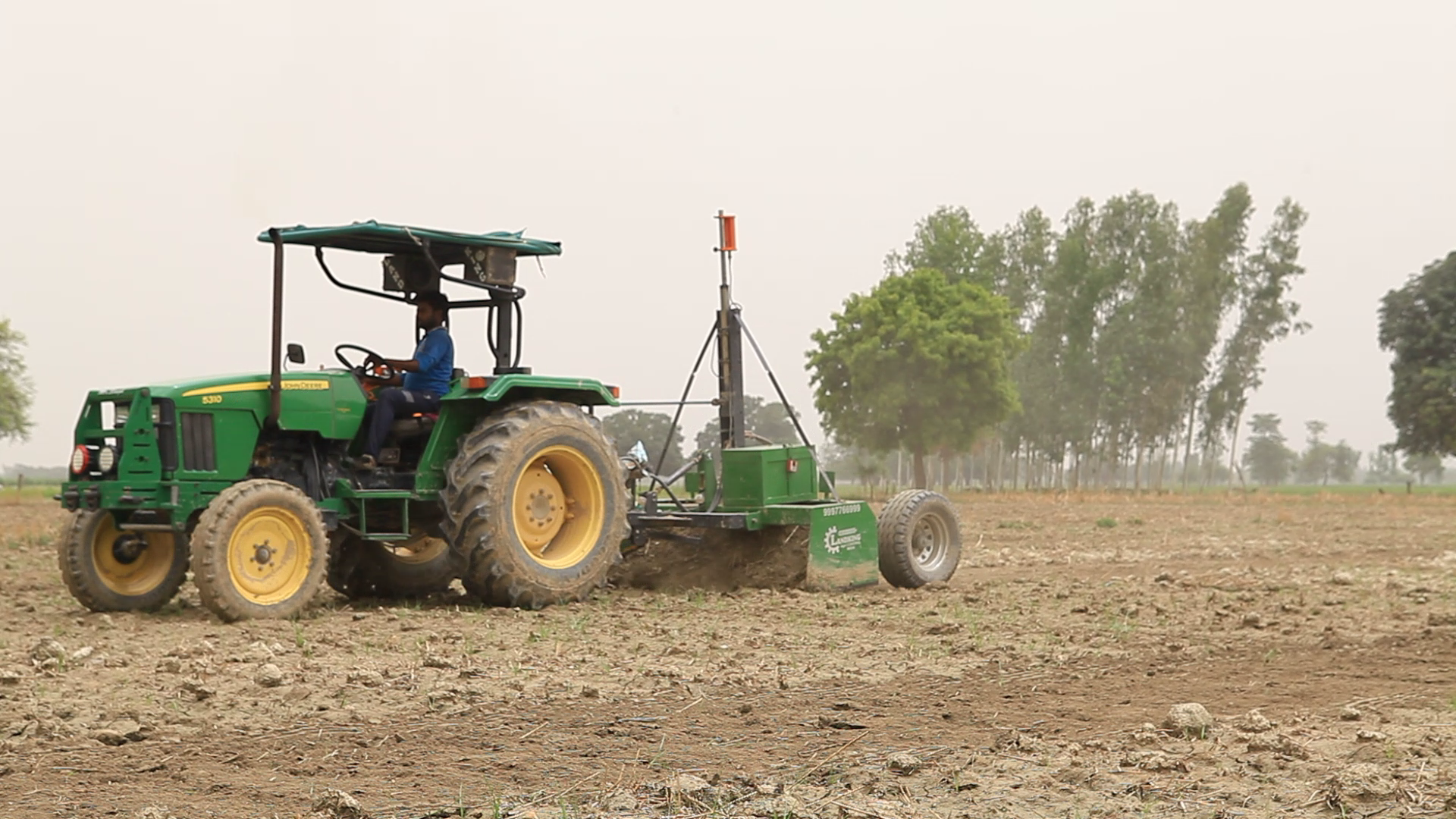 In 2018, Nature Bio Foods, a Fairtrade rice producer in North India took trials and demonstrations of Land Laser Levelling on 10 Acres of Land. On witnessing good results, the farmers agreed to invest the Fairtrade Premium amount to implement the project on a larger scale.. The organisation was able to level 1697.89 Acres of land in 2019 and a plan was made for further expansion. In 2020 they completed levelling an additional 1533.55 acres of land in 2020. 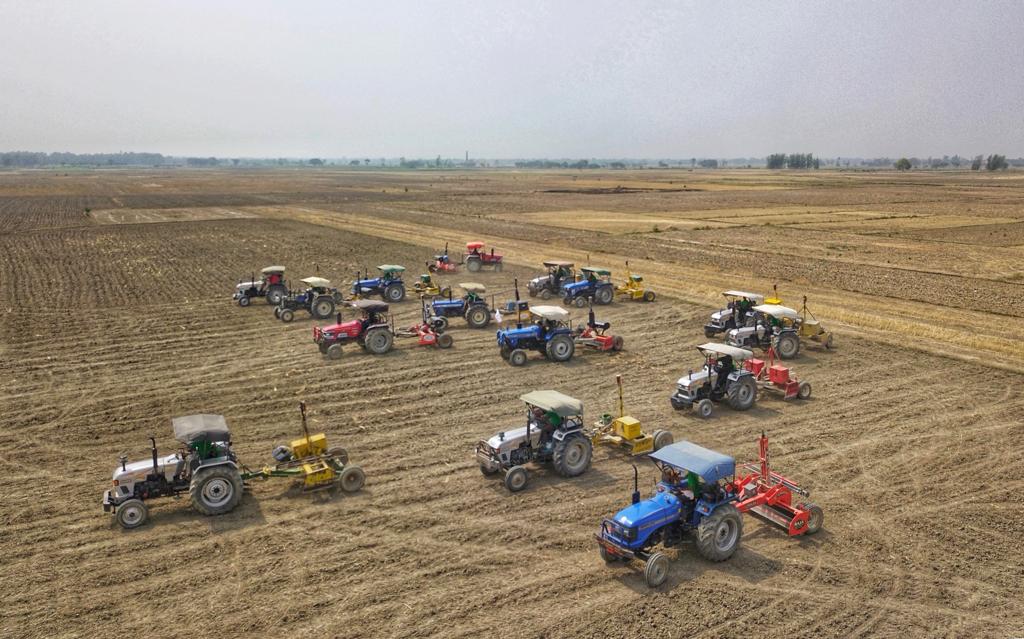 Though rice is an important staple food across Asia, it is also a water-intensive crop that consumes about 4,000 – 5,000 litres of water per kg of grain produced. Receding underground water tables and deteriorating soil health are other major concerns. An uneven field makes for inefficient use of water and much energy is exhausted in drawing water to the surface. Adaptation-led mitigation measures such as Systems of rice intensification (SRI), Land Laser levelling, and Alternate wetting and drying (AWD) can help save resources and energy, build the crop’s resistance to climate change and increase the crop yield.

So, what exactly is Land Laser Levelling?

It is a water-saving technology that uses minimal groundwater to ensure optimal coverage.  It smoothens out the land surface from its average elevation with laser-equipped drag buckets. In comparison to traditional levelled land, laser levelled land reduces waterlogging and run-off thereby, ensures the benefits of enhanced water application efficiency, improved crop stand by , energy conservation, and improved crop establishment. 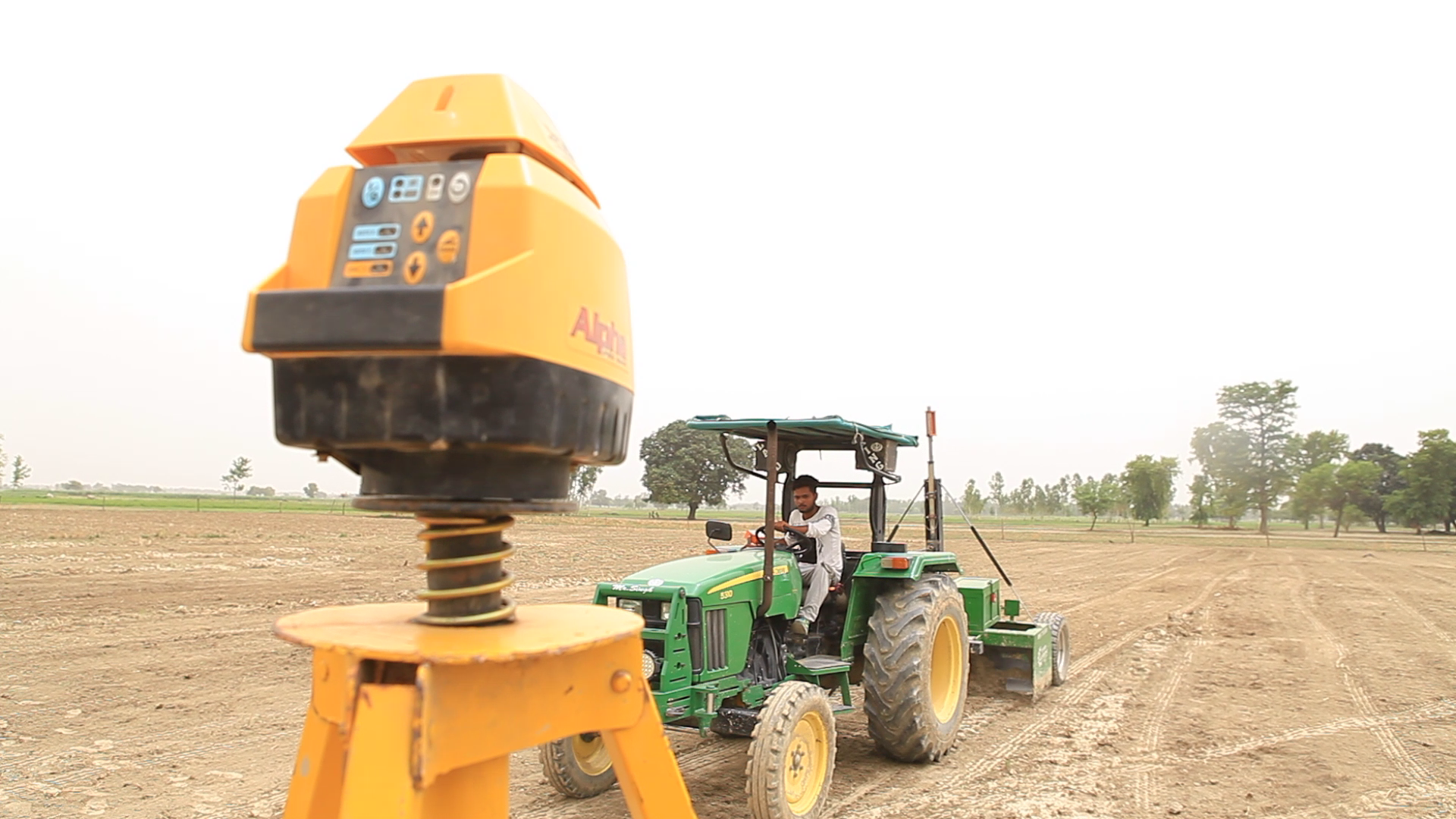 Farmers traditionally have been practicing land levelling in their fields by using animal-drawn or tractor-drawn levellers. These levellers are simple implements consisting of a blade and a small bucket for shifting the soil from higher spots to low-lying positions. Traditionally levelled or unlevelled lands lead to waterlogging conditions at low-lying areas and less soil moisture in higher levels. A significant amount (10-25%) of irrigation water is lost during application at the farm due to poor management and uneven fields.

In 2020 a study was conducted by Agri-experts for identifying and assessing the social, economic, and environmental impacts of Land Laser Levelling. The experts believed that improving farmers’ living conditions were the most important social impact and using this technology they could spend more time with their families due to working less and facilitating agricultural activities. They also assessed some of its important economic impacts such as an increase in net income and reduction of tillage cost, reduction in inputs cost, and working days.

Gyaneswar Pandey, a farmer from Materakala village, Uttar Pradesh has a total land area of 3.80 Ha registered under organic and Fairtrade. His son Anand Pandey, who is also a farmer, mentions- 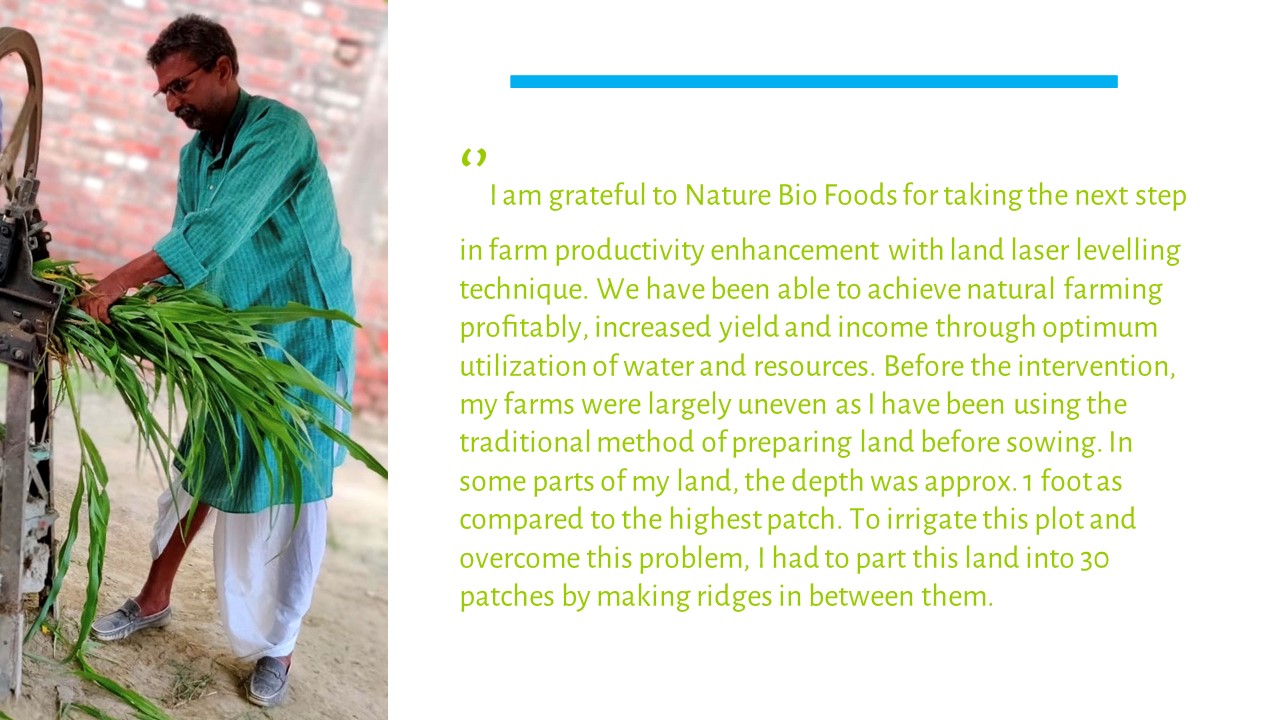 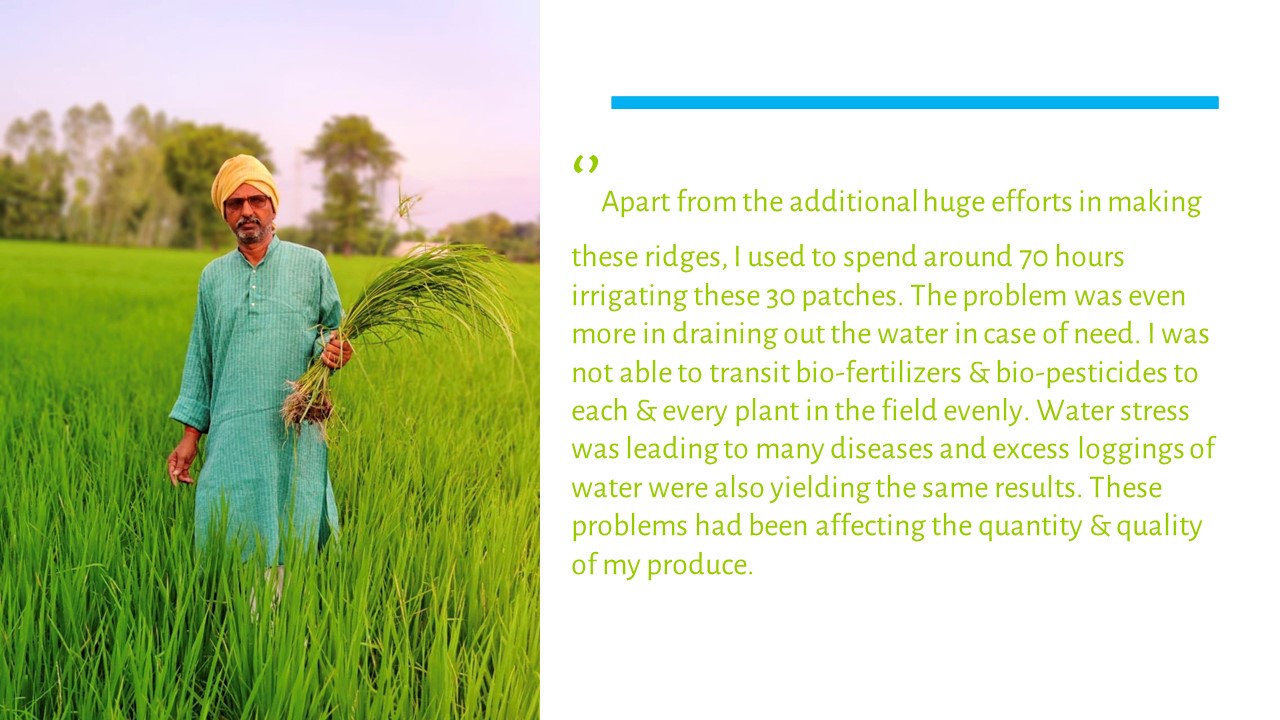 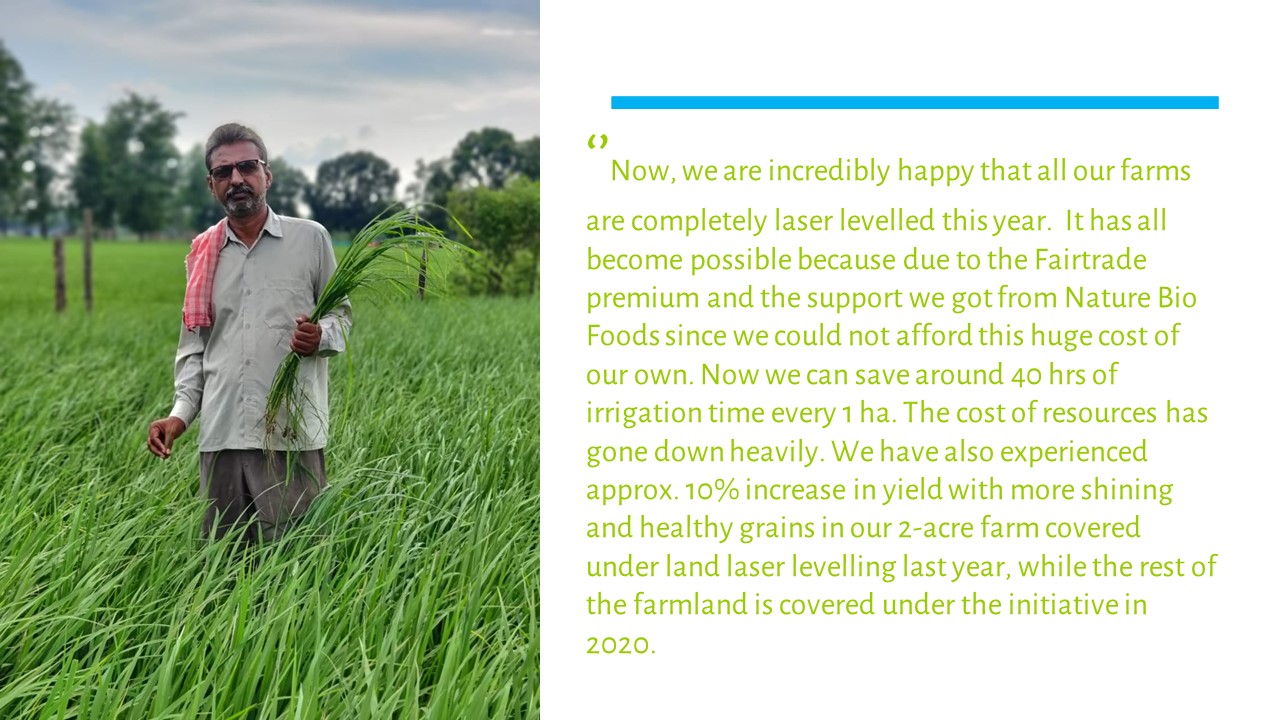 The Project is expected to save 1120 to 1440 million litres of groundwater, 210000 kgs CO2 and reduce electricity consumption by 755 kWh per hectare per year. Additionally, it will lower irrigation time by 47 to 69 hours per hectare per season and increase crop productivity by 7%. It has covered 1300 small and marginal farmers across 3200 acres of land in 2020 and, its impact and benefits will remain the same for the next 3-4 years.