Day 5: Fairtrade Run Up to International Women’s Day! THE EVOLUTION OF HANNAH NDUTA

In the run up to International Women’s Day, we are featuring some of the countless inspiring women who work in Fairtrade farms and communities. Today, we shine the spotlight on Hannah Nduta who despite being a high school leaver, is making her way through leadership at Wildfire Flowers in Kenya. 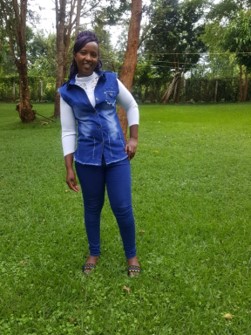 On a working day, Hannah Nduta Maingi will wake up at 5:30 AM, say her morning prayers and whip up some breakfast as she prepares her two children for school. At 7:00 AM, she gets to work, allocates the day’s roles to workers and later on supervises farm activities and coordinates the morning harvest. During the 1-hour lunch break, she will go home, have a meal with her youngest son and return to her station where she will coordinate the second harvest until 3:40 PM. When all other workers have made their way home, she will remain behind, consolidate the day’s production figures and prepare a report for her production manager.

12 years ago, the mother of two could not have imagined her path at Fairtrade Certified Farm – Wildfire Flowers in Naivasha, Kenya. Then joining as a casual laborer, she undertook all manner of tasks from harvesting, cleaning greenhouses to removing dry leaves off rose bushes. She would soon be re-assigned as a general worker and later on a scout, responsible for sniffing out pests and diseases before they become catastrophic.

Recognized for her talents, Hannah was promoted to Team Leader in 2012, a role that involved overseeing a number of general workers, managing the time schedule, ensuring the health and safety of workers among others. In 2016, she was promoted to her current role; Senior Supervisor where she oversees 5 team leaders, coordinates the flower production process and acts as the intermediary between management and workers.

In a sector that is primarily made up of women workers (80%) majority of whom are in the lower cadre, Wildfire Roses is going against the grain in the esteem female flower farm workers are accorded, especially in their capacity as leaders. This is in the spirit of the Fairtrade Standards which require certified producers to give special attention to the empowerment of women and equity at the workplace.

A high school leaver, Hannah is an outlier. Her journey at Wildfire Roses has not been by accident. Instead, it has been fueled by small purposive steps and the enabling environment created by the farm’s dedication to Fairtrade Standards, “ we receive a lot of training at work, most of it provided by Fairtrade Africa staff and other expert organizations, I have attended all of them, including training on gender roles and responsibilities,” she explains.

Her exposure allowed her to serve as the Gender Committee Chair, “as the chair, I created awareness among employees on the sexual harassment policy, guiding workers on what to do and where to go if they ever found themselves compromised,” she says.

Energetic and optimistic, Hannah is hopeful about the future, “Wildfire Flowers provides opportunities for anyone who is hardworking. I know there is more opportunity for growth, I can see that I will go even further.”

Ahead of the International Women’s Day 2020, we ask Hannah, to share a message with women around the world, “do not look down on yourself, you can go far if you are focused,” she concludes.